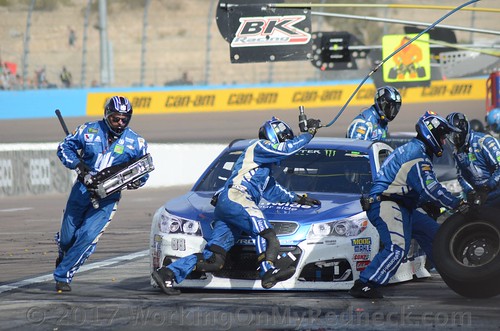 NASCAR announced Wednesday morning that it will standardize at-track team rosters across all three national series in 2018, providing a structure for the number of personnel working on each vehicle during the course of a race weekend.

The biggest competition impact from the rules update is the the number of crew members who go over the wall for pit stops moving from six to five.

At-track rosters for all three series will fall under three headings: Organizational, Road Crew and Pit Crew. Job descriptions and roster maximums for each category:

• Pit Crew: This designation refers solely to team members who perform over-the-wall service during pit stops. The maximum is five for all three series.

The exceptions to these numbers are slight. Monster Energy Series teams are allowed one extra road crew position at Indianapolis Motor Speedway and the three road courses (Sonoma, Watkins Glen, Charlotte), where teams often use multiple spotters. Also, an additional road crew roster spot will be allowed for XFINITY teams at 10 races and Truck Series teams at five.

It will be left to the teams’ discretion on how to best assemble their team – including the over-the-wall crew – within the roster limits. All rosters will be made public – for fans and media – before each race weekend.

For routine four-tire stops starting next season, teams could forgo one tire carrier and devise a new framework for servicing their vehicles.

The responsibilities of the fueler will also be narrowed, with other over-the-wall duties such as wrenching out chassis adjustments prohibited in 2018.

In another effort to bring further recognition to team members, rostered crew will be assigned letters or numbers worn on their uniforms and on armbands to identify their duties.