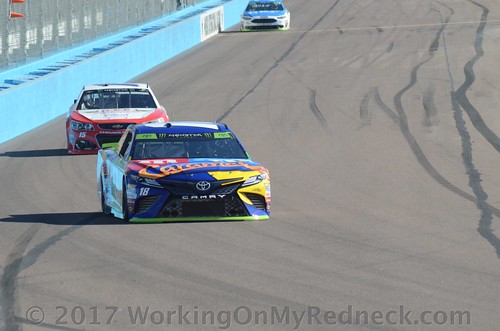 The final race came down to the finals laps, among the top cars from the dominant manufacturer, and ultimately, the most successful driver won the championship!

But even still, 2015 series champion Kyle Busch couldn’t take much comfort in fellow Toyota-driving Martin Truex Jr. of Furniture Row Racing winning his first Monster Energy NASCAR Cup Series championship at Homestead-Miami Speedway on Sunday. Busch, driving for affiliate Joe Gibbs Racing, would have much preferred that he had made up the final .681-second distance between the race-winner and champion and his slot in second place.

“It wasn’t quite what we wanted there at the end,” said Busch, who closed on Truex Jr. doggedly in the final 10 laps. “I thought we had a really great race car, especially on the long runs we were really, really good. Just came down to there at the end not having enough tire when I got to [Truex Jr.], so I just overused my stuff, and I knew I overused my stuff when I was running with [Joey Logano, then holding second place] trying to get by him and just overworked everything. And got to [championship-eligible Kevin Harvick], got by him pretty quick, I tried to make sure that I could do that pretty quick so then I could have at least a little more tire life, but didn’t seem to pay me off any when I got to [Truex Jr.].”

Busch led 43 laps and held a 21.4-second lead as part of a fuel strategy play on Lap 216 of 267, but was forced to surrender the lead to pit. He worked backed through the field because of his strength on lengthy runs and overtook Kyle Larson – who led a race-high 145 laps – for second place.

Busch’s five wins this season were second only to Truex Jr.’s eight.