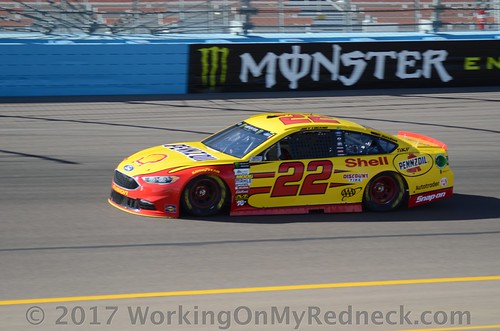 Recap: Brad Keselowski and the No. 2 Miller Lite Ford Fusion team came into Sunday’s Ford EcoBoost 400 at Homestead-Miami Speedway as one of four teams that could end the night as the 2017 Monster Energy NASCAR Cup Series (MENCS) champions, but a seventh-place finish resulted in a fourth-place finish in the final series standings. A solid qualifying effort on Friday night saw Keselowski take the green flag from the fifth position, and a quick caution on lap five gave crew chief Paul Wolfe an opportunity to put four, fresh Goodyear tires on the Ford Fusion to gain track position on the other playoff teams that did not elect to pit. The strategy worked as Keselowski restarted from the 15th position on lap 10 but quickly drove into the second spot by lap 30. When teams all began making green flag pit stops around lap 40 this strategy placed the Miller Lite team on the same pit cycle as the other playoff teams, albeit with better track position. As a result, Keselowski will finish the first, 80-lap stage in the second position. The biggest handling issue on the day for Keselowski was looseness on corner entry and Wolfe made several air pressure and wedge adjustments to help his driver contend for the team’s second MENCS title. After starting the second, 80-lap stage from the second position after a solid pit stop by the Miller Lite crew, Keselowski settled into the top five and would remain there to finish fifth in the stage. The final, 107-lap stage would setup the run to the championship and Keselowski began this portion of the race from the seventh position. With his driver still dealing with a loose-handling condition on corner entry, Wolfe called for a short-pit on lap 198 that brought most of the other playoff competitors to pit road as well. The short pit placed Keselowski back inside the top five and he radioed to Wolfe that the handling was improving. Unfortunately the Miller Lite Ford was a bit off the pace to the other championship contenders over the final run and would cross the finish line in the seventh position, the team’s 21st top-10 finish in 2017.

Quote: “You know, it was a hard‑fought battle with a long night, but might not have gotten the result we wanted with the Miller Lite Ford Fusion. Of course the result you want is to win the race, win the championship, but the effort was phenomenal, and I was really proud of our group for everything they put into that, trying to be the best with this package. We weren’t quite best in class, but we ran up front.”

Recap:  Joey Logano and the No. 22 Shell-Pennzoil Ford Fusion started 18th and finished sixth in Sunday’s Ford EcoBoost 400 at Homestead-Miami Speedway, the season finale for the Monster Energy NASCAR Cup Series.  Logano worked his way forward at the start of the event, battling a car that was tight on throttle and loose at corner exit. Fortunately, the race was slowed on the sixth lap for a single car incident. Crew chief Todd Gordon elected to bring the Shell-Pennzoil Ford to pit lane for a four tire stop with a wedge adjustment. As expected, the advantage from sticker tires allowed Logano to race from the 17th position to the top-five in six laps. The Shell-Pennzoil Ford ran inside the top-five, reaching the fourth position before pitting under green at lap 39. As the green flag stops cycled through, Logano returned to the running order in the fifth position. The adjustments made under the stop were in the right direction as Logano reported the Shell-Pennzoil Ford was tighter overall through the long green flag stretch to end the first stage. However, at the stage break, Logano reported that the car was too tight in the center of the corner, hurting entry and exit. Gordon elected to go back on the adjustments from the first stop slightly, as Logano went from fifth to ninth by the end of the stage. Logano restarted ninth and quickly moved to seventh in the opening lap of the second stage, the adjustments worked to give the driver more speed at the start of the run. The stage continued to run green, bringing Logano and the Shell-Pennzoil Ford back to pit road at lap 120 for a green flag adjustment. The team made an air pressure adjustment, continuing to look for corner entry security. Logano cycled out into the fifth position but then settle to seventh by lap 128. On lap 136, Logano reported the brakes were pulsating slightly, more like they were too cold versus a wear issue. Logano also reported the balance was the best it had been all race, letting Todd Gordon know he would continue asking for more entry security and center turn throughout the night. At the end of the second stage, Logano brought the Shell-Pennzoil Ford to pit road in the eighth position, quick pit work by the crew sent the team back to the track in the sixth position. With a great restart, Logano put the high line to use, moving the Shell-Pennzoil Ford to the fourth position. As the opening run to the final stage ran green, Logano settled into the sixth position, but reported that the car had started coming to him over the course of the run, saying he was only slightly loose on corner entry and exit. As darkness continued to set on Homestead-Miami Speedway, Logano continued to assert himself in the top-five. A lap 227 caution flag setup the Shell-Pennzoil crew for a potential final stop of the night. Todd Gordon again called for a piece of tape to be added to the nose, slight air pressure attempting to give Logano more security and center turn. A quick stop again gained the team a position leaving pit road, putting the Shell-Pennzoil Ford on the outside of the second row for the restart. Logano would settle into the third position after the restart, running lap times as fast as the two cars in front of him. As the run went on, Logano began losing rear grip hurting the car on corner exit. Logano would ultimately finish in the sixth position, caping of the 2017 Monster Energy NASCAR Cup Series season.

Quote:   “That was a good night for the Shell-Pennzoil Ford team. We never quit through the whole year and we end it on a strong note. It is always important to have a good run at Homestead because you have the whole offseason to think about it. I wanted that top-five but just wasn’t quick enough up by the wall. I don’t know why our cars don’t go fast up against the wall. The 4 couldn’t do it either. Maybe it is something we are doing. I am not sure. Altogether, I am proud of getting a sixth place run out of a car that we thought we would struggle to finish 20th with. We made good changes and had something to race with and get to head off on a good note.”