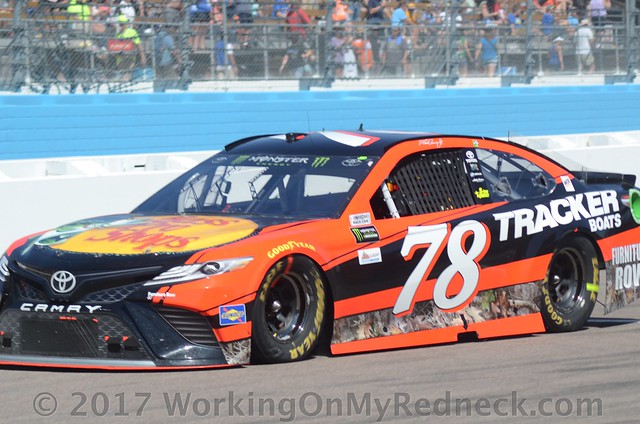 At the end of a riveting, breathtaking battle that had fans in the grandstands on their feet long after the checkered flag, Martin Truex Jr. held off Kyle Busch by .681 seconds at Homestead-Miami Speedway to win Sunday’s Ford Eco-Boost 400 and his first Monster Energy NASCAR Cup Series title.

In Dale Earnhardt Jr.’s last race in the No. 88 Hendrick Motorsports Chevrolet, Truex—one of Earnhardt’s closest friends—kept Busch behind him during a 34-lap green-flag run to the finish.

“It’s just overwhelming,” a tearful Truex said in Victory Lane. “To think about all the rough days and bad days, the days that we couldn’t run 20th, to be here—I never thought this day would come, and to be here is so unbelievable.”

The victory was a timely gift for Furniture Row Racing owner Barney Visser, who is back home in Denver, Colo., recovering from a heart attack and subsequent bypass surgery. It was also a gift to Truex’s long-time girlfriend Sherry Pollex, who has been battling ovarian cancer.

The victory also was entirely appropriate. For the bulk of the season, Truex was the top driver in the series. Sunday’s victory was his eighth of the year, a series-best, and his seventh on 1.5-mile intermediate speedways. Truex had the No. 78 Toyota out front for 78 laps on Sunday, bringing his season total of laps led to a career-best 2,253, also tops in the series.

With an excellent long-run car, Busch slipped to fourth after the final restart on Lap 234 of 267 and needed nine laps to pass the stubborn No. 22 Ford of Joey Logano. Seven laps later, Busch slipped past fellow Championship 4 contender Kevin Harvick into second and set his sights on Truex.

Busch closed rapidly, but Truex found a line that allowed him to maintain an edge that shrank to as little as two car lengths. But Busch never could pull alongside his fellow Camry driver, and Truex inched away over the last four circuits.

“I told my guys we were going to dig deeper than we ever have today, and (with) 20 (laps) to go, I thought I was done – they were all better than me on the long run all day long,” Truex said. “I just found a way. I found a lane that I could use, and I found a lane that was blocking enough of their air that they couldn’t use it and just made it happen.

“I can’t believe it. I’ve wanted this since I was a little kid and just never give up. Just never give up on your dreams, no matter what happens and what kind of crap you go through. And thank you, Barney. I wish you were here, buddy.”

Kyle Larson finished third, closely trailing the championship battle after moving past Harvick for third on Lap 252. Harvick came home fourth, after debris from David Starr’s Chevrolet punched a hole in the nose of the No. 4 Stewart-Haas Racing Ford.

“I was just really loose the whole last run,” Harvick said. “When it started to get dark, we started to get tight in the corner, and then we got a hole in the nose. We got that fixed and just couldn’t quite get it where we needed to be to make good times.

“Some runs we fell off. Some runs we were tight on entry. There at the end we were just too loose.”

Busch opted for a one-pit-stop strategy during the final stage of the race and appeared headed for the title until his brother, Kurt Busch, spun in Turn 4 on Lap 227 to bring out the fifth and final caution of the event and bunch the field for the restart on Lap 234.

“Yeah, it wasn’t quite what we wanted there at the end,” Busch said. “I thought we had a really great race car. Especially on the long runs, we were really, really good. Just came down to there at the end, not having enough tire when I got to the 78.

“So I just overused my stuff, and I knew I overused my stuff when I was running with the 22 (Logano) trying to get by him and just overworked everything, and got to the 4 (Harvick), got by him pretty quick. I tried to make sure that I could do that pretty quick so then I could have at least a little more tire life, but didn’t seem to pay me off any when I got to the 78.”

Notes: Earnhardt finished 25th in his final run in the No. 88 Chevy… Danica Patrick cut a tire and clobbered the Turn 2 wall on Lap 142 in her final trip in the No. 10 Stewart-Haas Racing Ford. She plans to race in the Cup series for the final time in the 2018 Daytona 500… Patrick also collected Kasey Kahne in her wreck. Kahne ran his final race for Hendrick Motorsports on Sunday and will move to the No. 95 Leavine Family Racing Chevrolet next season… Truex’s teammate, Erik Jones, was crowned Sunoco Rookie of the Year in the series after finishing 21st. Jones will take Matt Kenseth’s place in the No. 20 Joe Gibbs racing Toyota next season. Kenseth finished eighth Sunday in his final ride in the car.

Check out the unofficial results of the Ford EcoBoost 400 at Homestead.