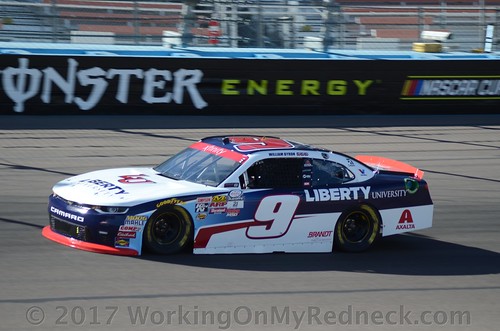 As Cole Custer celebrated his first victory in the NASCAR XFINITY Series and 19-year-old William Byron reveled in the series championship, a heartbroken and angry Elliott Sadler confronted the driver he believed cost him a long-coveted NASCAR title.

Custer took the checkered flag in a different zip code, crossing the finish line 15.405 seconds ahead of second-place Sam Hornish Jr., who delivered the owners’ championship to Roger Penske. The real action, however, occurred three-quarters of a lap behind the winner.

Sadler had passed Byron, his JR Motorsports teammate on Lap 165 of 200. The 42-year-old veteran stayed out front until Lap 191, when he closed on the No. 18 Toyota of Ryan Preece and lost momentum. Byron charged past Sadler into third place—and into the lead among the four drivers battling for the title.

With four laps left, Sadler pulled up to Byron’s bumper. Byron shot past Preece’s Toyota, clearing him to the inside. Sadler tried to follow but couldn’t complete the pass, and slid up into Preece’s Camry, with the right front of Sadler’s No. 1 Chevrolet clipping the left rear of the Toyota.

Sadler hit the wall and his title hopes were gone. The disconsolate driver finished second in the NASCAR XFINITY Series standings for the fourth time, and his disappointment stood in marked contrast to the elation of his young teammate.

“I don’t know that I took a breath the last 20 laps,” Byron said. “That was incredible. I just have to thank this team. This is awesome. Elliott raced me clean, and we just raced hard for it. I just can’t believe this.

“I’ve just got to thank God for giving me this platform to perform. I can’t believe this. I’m tired, whew. I’ve never driven that hard in my life.”

Team co-owner Dale Earnhardt Jr. had his share of nervous moments as his drivers fought for the championship.

“Man, that is tough watching those guys battle like that together,” Earnhardt said. “William did a great job running an awesome race. To be as young as he is, he drove like a veteran tonight. I know Elliott is probably really disappointed. It’s hard to watch any of your guys lose one, but at least we will be taking the trophy back to Mooresville tonight.

“This is great for JRM and all our employees. One thing about William winning, the over-the-wall guys I’m pretty close to a lot of them. They pit my car, too (in the Monster Energy NASCAR Cup Series). It’s pretty cool to see these guys enjoy themselves. This really effects a lot of people.  I’m really glad to be a part of it.”

All but forgotten in the dramatic championship battle and its aftermath was Custer’s overwhelming maiden victory. Pulling away steadily after a restart on Lap 97, Custer posted the largest margin of victory in the series this season and the largest ever at the 1.5-mile track.

Custer led 182 laps and scored a perfect driver rating of 150.0, the only time a driver has accomplished that feat this year.

“We knew we were going be really good this weekend, but our Haas Automation Mustang was unreal,” Custer said. “We really wanted to have a good showing at Ford Championship Weekend.  Even though we weren’t in it (the Championship 4), we wanted to win.”

Preece was racing for the owners’ championship against the No. 22 Ford of Hornish and the No. 9 Chevrolet of Byron after Christopher Bell fell out with engine problems after 78.

“To be honest with you, if there’s a person you don’t want to cost a championship to, it’s Elliott Sadler,” said Preece. “You know, I’m just trying to do team orders here. I was racing for an owner championship. Yeah, we weren’t racing for the win right there, but we were still racing the 9 (Byron).”

“It’s not where I want to be right there. Obviously, I hate it, but I can’t take it back.”

Editor’s Notes: With only three cautions—two for planned stage breaks–the race set a speed record at 136.140 mph… Championship contender Justin Allgaier had seven-time Cup champion Chad Knaus calling the shots on his pit box in place of suspended Jason Burdett, but Allgaier’s car struggled to a 12th-place finish, third in the title race… Daniel Hemric, the fourth Championship 4 driver, and the only one not from the JRM stable, lost 12 laps with electrical problems early in the race and came home 34th.