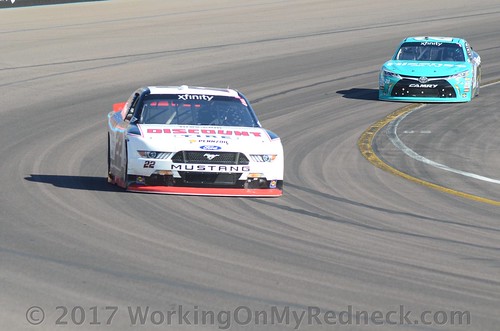 Recap: Sam Hornish Jr. raced his way to the second position and claimed Team Penske’s fourth NASCAR XFINITY Series Owner Championship in Saturday night’s Ford EcoBoost 300 at Homestead-Miami Speedway in the No. 22 REV Group Ford Mustang. While the team reached the ultimate goal at the end of the event, the race began with tension as Hornish reported the brakes on the No. 22 Ford Mustang were going soft in the opening twenty laps. Hornish moved from the eighth position inside the top-five despite the soft brakes and tight handling condition. When the first caution flag of the race was displayed at lap 18, crew chief Greg Erwin elected to leave the car on the track, as did the rest of the lead competitors. When the race resumed, the handling of the Mustang continued to deteriorate and Hornish dropped out of the top-10, concluding the first stage in the 13th position. To complicate matters, Hornish reported the brakes were starting to get extremely soft, making it difficult to carry speed into the corners and get the car to rotate. On the first stop of the day, Erwin elected to adjust with air pressure and added a piece of tape to the nose of the REV Group Mustang. During the opening 20 laps of the second stage, Hornish began moving forward, running the fastest laps on the track, quickly climbing back inside the top-five. At lap 73, Hornish reported to the team he hadn’t used the brakes in 20 laps, confirming that the adjustments had indeed helped the handling of the REV Mustang. Hornish finished the second stage in the second position, despite needing more center turn. On the second stop of the race, the team made a track bar adjustment and air pressure, making a minor swing on the handling of the car as conditions began to cool with the sun setting over turn 1 at Homestead-Miami Speedway. Through the opening run of the final stage, Hornish ran consistently in the second position, maintaining the leaders pace while building a gap to the cars behind him also vying for the owner title. At lap 144, crew chief Greg Erwin called the No. 22 REV Ford to pit road for four tires and an air pressure  adjustment, hoping to give Hornish the center turn he needed for the rest of the race. After the green flag pit cycle, the team returned to the second position, running one position ahead of the No. 18 for the owner’s championship. Through the third run of the day, Erwin continued to remind Hornish to preserve the tires should the race go green to completion. In the last forty laps, spotter Joey Meier, who will spot for Brad Keselowski tomorrow as he chases his second Monster Energy NASCAR Cup Series title, worked on giving Hornish targeted lap times as the team worked to manage the gap behind to the other owners title competitors. The race remained green with Hornish running in the second position to the checkered flag and to the 2017 NASCAR XFINITY Series Owner Championship. The championship marked the 31st national title for Team Penske, in 51 years of motorsports.

Quote: “Great day. It didn’t look really good after the first stint. I didn’t have any brakes left. Not sure what happened. We’ve been having a little bit of a brake issue. I may have rode them too hard trying to get the car to do what I wanted it to do. The Ford Mustang came to life after we were able to make some changes on it on the first stop. I basically didn’t use any brakes on the last 155 laps. It was great that we didn’t have a bunch of restarts. I felt that if we did we might have had to makes some adjustment to run with Cole. Congratulations on Cole (Custer) in winning his first race and William (Byron) for winning the championship. (They) brought me down here to take care of the car and make sure we got our goal accomplished and I felt that we did a good job doing that. As a racecar driver you always want a little more. You want to win the race. Just really happy. Looking forward in getting home tomorrow to see my wife and kids. I just want to thank everyone at Penske for putting me in this car. Thanks to Roger, Tim Cindric and the guys for giving me this opportunity.”