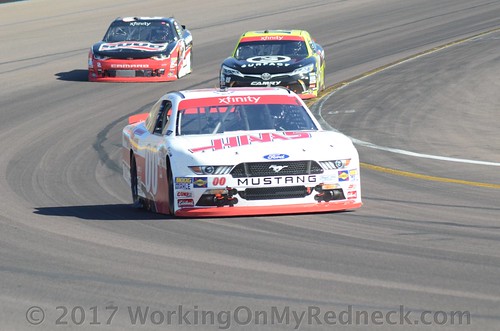 ● Took the lead on lap three and held it for the next 21 laps around the 1.5-mile oval.

● Relinquished the lead for only three laps following a lap-24 restart before retaking lead on lap 27 from Tyler Reddick.

● Custer led through the end of Stage 1.

● Pitted for four tires, fuel and tire pressure adjustments at the conclusion of Stage 1.

● Custer ran inside the top-five and reassumed his position at the front by lap 62, leading through the end of the stage.

● At the end of Stage 2, pitted for four fresh tires, fuel and tire pressure adjustments to improve his drive off the track’s corners.

● After taking the lead in Stage 2, Custer never gave up the point, leading the race’s final 139 laps, even during a scheduled, green-flag pit stop on lap 144 for four tires and fuel.

● Earned a perfect driver rating by sweeping both stages and taking the race victory (150.0).

● Custer led three times for a race-high 182 laps. It is a record for the most laps led in a single XFINITY Series race at Homestead.

● This was Custer’s rookie season in the XFINITY Series, and he ends it with seven top-five and 19 top-10 finishes.

● Custer earned the most points at 1.5-mile tracks among XFINITY Series drivers this season (422).

● Custer’s win was the ninth XFINITY Series victory of the season for Ford.

● Custer is the 36th different driver to win an XFINITY Series race with Ford.

“We knew we were gonna be really good this weekend, but our Haas Automation Mustang was unreal. We really wanted to have a good showing at Ford Championship Weekend. Even though we weren’t in (the Championship 4), we wanted to win.

“Going into this year there were so many question marks, and to see how far we’ve come is really unbelievable. I have to especially thank Gene Haas. I would never be here without him and I can’t thank him enough.

“I can’t stress enough how good this Haas Automation Mustang was. I was just pedaling it going half-speed the last few laps. I’ve had some good cars before, but that was pretty impressive. I can’t say enough about this group. They’ve worked so hard all year getting us up and going and it’s just unbelievable.  There’s no better team I’ve worked with before and I can’t thank them enough.”