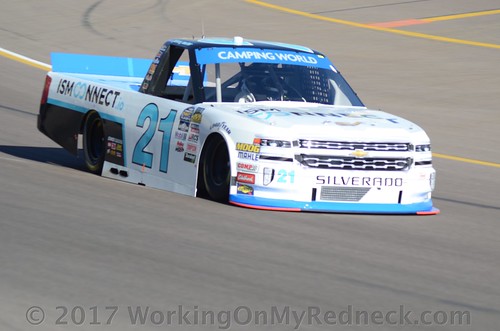 There would be no repeat for Johnny Sauter in the NASCAR Camping World Truck Series on Friday night at Homestead-Miami Speedway.

“This is hard. This is tough,” Sauter said, “To come down to one race. They were just better than us tonight.”

Ultimately, an eighth top-ten finish in 12 races at Homestead wasn’t enough for Sauter.

Chase Briscoe, who was not eligible for the championship, won his first career race.

Sauter improved through the second of three segments and ended the second session in fifth place, second of four championship-eligibles behind Bell. He restarted sixth, third among the hopefuls.

GMS Racing announced before the race that Sauter, 39, had signed an extension to return to the team in 2018. He’d locked into the final with a win at Texas Motor Speedway and won again at Phoenix Raceway to enter the final with momentum and markedly better statistics than when he captured his first crown with the first-year team in 2016. Sauter won three races last season but entered Friday with four, his average finish had improved from 9.1 to 4.9 and he’d led 455 laps as opposed to 130.

“One spot too short, I guess,” Sauter said. “We had a great year and we get to do it again next year, so I look forward to that.”