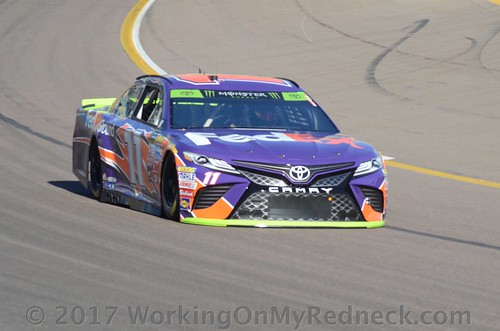 Truex, in turn, was .004 seconds faster than title contender Kyle Busch (173.930 mph). Championship 4 drivers Brad Keselowski (172.452 mph) and Kevin Harvick (171.876 mph) qualified fifth and ninth, respectively, with Harvick sawing on his wheel in Turn 1 on his money lap to save a car that was unexpectedly loose.

The Coors Light Pole Award was Hamlin’s second of the season, his second at Homestead and the 26th of his career. And he won it despite brushing the wall out of Turn 4 on his final lap.

“We had them there by a little bit, and I messed up (Turns) 3 and 4 a little bit,” said Hamlin, who was eliminated from the Playoff last Sunday at Phoenix Raceway. “Honestly, it was a great run, and we did great adjustments there.

“Our FedEx Camry was obviously very fast that last run. I love this race track, and wish we would have our chance, but that will be another day, another year for us.”

Truex was happy to be the fastest among the championship contenders, but he’s fully aware the trophy won’t be awarded until Sunday.

“That was a bit dramatic,” Truex said with a wry smile. “We missed it a little bit in that last round, lost more grip than I anticipated. We made some adjustments knowing it was going to go that way, just not far enough… It was just five one-thousandths off from being a perfect day…

“I think we definitely wanted to be first to get that first pit stall, but aside from that, we’re all up front, we’re all close to each other, and this is a track you can pass on. Just in general I was proud of my team for having a good, solid day. We had a shot there and just missed it a little bit there in Round 3. Good, solid effort and that’s what we needed to do today, and we’ll get to work and see what we can do on Sunday.”

Harvick was fourth fastest in the first round and fifth in the second, but his No. 4 Stewart-Haas racing Ford broke loose as he started his third-round lap.

“Just about spun out there going into Turn 1,” Harvick said. “It was definitely sideways. It kept turning, but the back tried to go the other way.”

Busch was pleased with his lap but felt he had the car to challenge for the pole in a race where the highest finisher among the Championship 4 wins the series title.

“We had a pretty good first round and second round, and when Martin went out there and ran an oh-something (31.043 seconds), I felt like there was a .90 out there and an opportunity to beat him and go for the pole,” Busch said.

“Trying to cut my Turn 1 entry, I got to the bottom too soon, hit the apron and messed up the exit off (Turn) 2 and felt like I tried to get a little more back in (Turns) 3 and 4 than I needed to and probably messed up down there.”

Keselowski, who had as-yet-unresolved brake issues during Friday’s opening practice qualified at the top end of his expectations.

“It was probably a tad bit higher than I thought we would end up… but I’m not complaining,” Keselowski said.

Dale Earnhardt Jr. did not make a run in the second round after posting the 15th fastest lap in the first. In his final run in the No. 88 Hendrick Motorsports Chevrolet, Earnhardt will start from the rear of the field because of an engine change during opening practice.