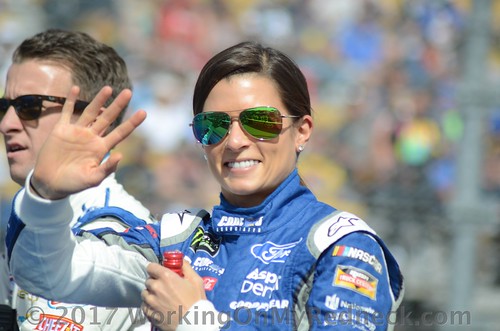 Danica Patrick said good-bye to racing during a tearful press conference on Friday at Homestead-Miami Speedway—but it will be a long good-bye.

“This will be my final season as a full-time driver,” Patrick said between sobs, before revealing plans to finish her career by running two more races in 2018, the Daytona 500 and the Indianapolis 500.

Though Patrick said details had not been finalized for either race, she indicated negotiations on both fronts have been under way for some time.

“We’re down the line with different facets of moving forward, but nothing’s final yet,” Patrick said. “Hopefully, it will be soon, but things are definitely not set.”

Patrick announced recently she would exit her ride in the No. 10 Stewart-Haas Racing Ford at the end of the season, citing lack of sponsorship. Aric Almirola will replace her in the car next year.

“I feel like this is where my life should be headed, and sometimes we just get nudged there,” Patrick said. “Sometimes it’s big nudges, and sometimes it’s little. But I definitely was faced with situations at the beginning of the year that I’d never faced before. I never had sponsor issues.

“But it made me think about things. And I’m excited about the next phase, trust me.”

It’s appropriate that the Daytona 500 will be Patrick’s last race in a Monster Energy NASCAR Cup Series car, given that Daytona is the site of her foremost accomplishment in the series. Patrick won the Coors Light Pole Award for the 2013 version of the Great American Race, the only pole of her Cup career.

She has posted seven top-10 finishes in 189 career Cup starts entering Sunday’s Ford Eco-Boost 400 at Homestead, with a best result of sixth at Atlanta in 2014.

But Patrick grew frustrated with her inability to find the speed necessary to compete with the elite drivers of the sport.

“It’s super competitive,” Patrick said. “It’s twice the field of IndyCars, 40 instead of 20, basically. The cars make a big difference. I feel like there’s a lot out of your control as a driver, and that’s frustrating. I tried every approach I could to figure out how to make the car go fast.

“Do I push people? Do I let them do their job? Do I question them? Do I ask for other things? I tried every approach, and, really, all that ended up happening was I lost my crew chief the first time around with Tony Gibson. I didn’t end up wanting that to happen. So I was like ‘Well, shoot, nothing really worked.’ So here I am.”