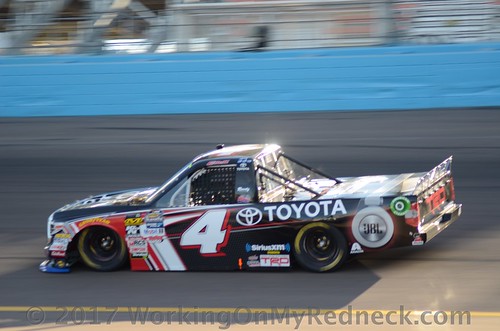 In a Ford EcoBoost 200 that ran caution-free except for the planned breaks after the first and second stages, Briscoe, the pole winner, passed Ben Rhodes for the lead on Lap 96 of 134 on Friday night and pulled away to beat Bell to the finish line by 2.887 seconds, after Rhodes ran out of gas on Lap 129.

Two enormously talented open-wheel stars who have made successful transitions to stock car racing, Bell and Briscoe are close friends, but their careers have been following markedly different trajectories as of late.

Briscoe collected the last trophy for Brad Keselowski Racing, which is closing its doors at the end of the season, and he hasn’t announced plans for next year. Bell, on the other hand, will run for the NASCAR XFINITY Series championship next season in top-of-the-line equipment at Joe Gibbs Racing.

“To be able to do this for all of the guys at Kyle Busch Motorsports and to win the championship for a team that deserves the championship, words just can’t describe my feelings right now,” said Bell, who scored a series-high five victories this season.

“To run as good as we have, week in and week out, and not just this year … This whole organization, this whole team has been good for so many years. You just don’t want to be the guy that lets them down, and I’m glad I didn’t let them down tonight.”

Briscoe, who also won the 2017 Sunoco Rookie of the Year, certainly improved his standing with the win, achieved in his 23rd start in the series.

“This is a long time coming,” said Briscoe who finished one position and nearly 16 seconds ahead of third-place Sauter, the defending series champion. “So proud of all these guys. To know that they’re not going to have a job next year, and we continued to bring really good trucks even though we were outside the playoffs, such a testament to how good these Brad Keselowski guys are.

“I know two years ago I was sleeping on couches, and now to be a winner in NASCAR. I wish we were in the final four. I felt like we could have been, but that’s part of the circumstances.”

By virtue of his third-place finish, Sauter was runner-up for the championship. Cindric, Briscoe’s teammate at BKR, ran fifth, one position ahead of Crafton, a two-time series champion.

Bell started 2017 with a victory in the Chili Bowl Nationals for midget cars, a title the Oklahoma native has coveted since childhood. He ends the year as the NASCAR Camping World Truck Series champion, a perfect bookend to a banner year for the 22-year-old prodigy.

Check out the unofficial results of the Ford EcoBoost 200.