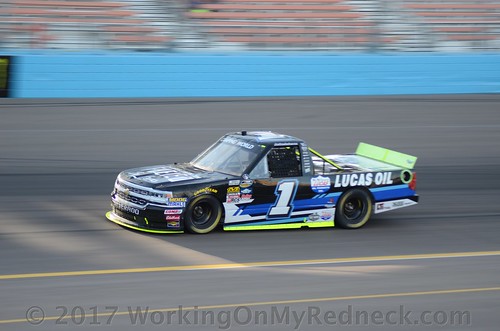 Adventures we experience during our lives are often times categorized in how amazing they were by the amount of stories that can be shared from the journey, through all the twists and turns experienced along the way and memories made.

Starting at Daytona earlier this year in February, and culminating this coming Friday night at the Homestead-Miami Speedway; the 2017 season has been an amazing journey for Jordan Anderson and his small team as they competed full time in the NASCAR Camping World Truck Series with their #1 Chevrolet Silverado.

While using the same race truck in every event they’ve competed in since the start of the season, and traveling over 18,000 miles together in their dually and gooseneck trailer, Anderson and his crew are sitting 17th in the the championship standings and have logged seven Top 20 finishes with a season best coming last weekend in the Lucas Oil 150 at the Phoenix Raceway with a 13th place finish.

With a do-whatever-it-takes attitude and never give up mindset, they are on the final leg of a 3 week road trip. Starting with their race in Fort Worth, Texas, which was crowdfunded through the Fueled By Fans SponsorJordan.com website, it led them to the deserts of Phoenix, and has them heading back across the country to Miami.

During Friday night’s race, Jordan Anderson’s #1 will feature a new blue and white paint scheme this weekend with a familiar name on the truck. Jacob Companies, the Official Construction Company of NASCAR, will return as a primary partner for Anderson at the Homestead-Miami Speedway in the Ford Ecoboost 200.

“The entire 2017 season has been made possible by each person that believed in what it was we were trying to do this year and joined the journey.” said Anderson. “It’s been humbling to see the support we’ve gotten each week, through the friends behind the scenes in the shop, fans, and our partners, that keep us on the racetrack. Through the high’s and lows, we’ve trekked through it all with perseverance and faith that has kept us moving forward. It’s going to be an absolute honor to have the opportunity to represent Jacob Companies and their entire family of team members and clients this weekend.”

Joining Jacob Companies on the truck for Friday night’s race will be the Bommarito Automotive Group, Lucas Oil, iSponsor Racing, Knight Fire, and LTi Printing. Jacob Companies and Anderson will also be raising awareness for A World of Pink and women everywhere with a goal of changing breast aftercare one fitting at a time.

Don Perry, CEO of Jacob Companies was excited at the opportunity of finishing the season strong with Jordan Anderson and his #1 team. “Jordan’s character, integrity, and work ethic are unparalleled. He’s dependable, loyal, and a part of our family here. His approachable and engaging style; appreciating all who support the sport, has captured our hearts. I am grateful and proud to have him represent our entire team of JACOB Companies on his #1 Truck this weekend in Homestead-Miami.”