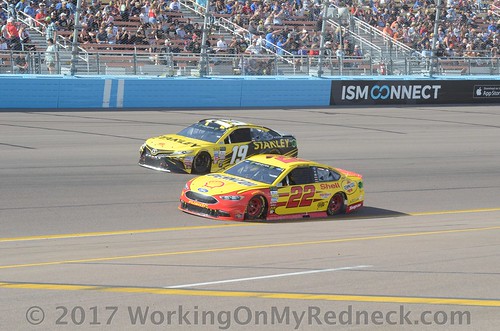 Recap:  It may not have been the performance they wanted, but with a 16th-place finish in Sunday’s Can-Am 500 at Phoenix International Raceway, Brad Keselowski and the No. 2 Miller Lite Ford Fusion team will head to Ford Championship Weekend next weekend at Homestead-Miami Speedway (HMS) with an opportunity to race for their second Monster Energy NASCAR Cup Series (MENCS) championship. Keselowski began the race from the 16th position and early on in the event Keselowski radioed to crew chief Paul Wolfe that he was struggling on the one-mile desert oval. Wolfe made big adjustments to the Ford following the team’s 18th-place finish in the first, 75-lap stage to help the loose in and tight in the center handling condition. While the condition was slightly improved during the second, 75-lap stage, Keselowski was only able to muster a 13th-place finish, meaning the team had scored no stage points during the event as found themselves on the outside looking in to the Championship 4 at that point in the race. However, the driver and team never gave up on the day and would be rewarded for their efforts when the No. 11 of Denny Hamlin – one of their main competitors for the final playoff spot at HMS – cut down a tire on lap 276 to send him into the garage and place the No. 2 Ford team back into the Championship 4. The team still needed to run well and when the No. 20 of Matt Kenseth passed the No. 24 of Chase Elliott – another contender for the final playoff spot – on lap 303 to score the win, the Miller Lite crew was able to celebrate their opportunity to win a second MENCS title to go along with the one they captured in 2012. Keselowski, Kevin Harvick, Martin Truex Jr and Kyle Busch will compete next weekend in a winner-takes-all duel on the 1.5-mile oval in south Florida. This will be Keselowski’s first appearance in the final race of the season in the elimination-style format that was introduced in 2014, but the third-consecutive year that Team Penske has been represented in the championship race.

Quote: “We overcame a lot of obstacles and jumped a lot of hurdles today. I am glad I don’t have to relive this day, that is for sure. I am just looking forward to going to Homestead with this Miller Lite Ford team. This feels a little bit like Christmas. Sometimes you need a little luck on your side. Today we had that. It wasn’t by any means where we wanted to run. We wanted to run up front and have a shot for the win. That wasn’t in the cards. We tried to run the smartest race we could and survive and it ended up paying off in the end. We probably should have been locked in after Martinsville with the effort we put in that weekend so if this is a little bit of redemption then I am happy for all these guys. We’ve had a good year and they deserve a shot at another championship. We have that now and we will make the most of it.”

Recap: Joey Logano started ninth and finished 12th in Sunday afternoon’s Can-Am 500 at Phoenix International Raceway. From the drop of the green flag, Logano reported that the handling on his No. 22 Shell-Pennzoil Ford Fusion was extremely tight in the center of turns three and four, resulting in the loss of six positions through the opening 20 laps. Logano reported that the handling of his Ford Fusion started to come to him around lap 40. Crew chief Todd Gordon began devising a plan for a adjustments settling on air pressure and tape for the first stop of the afternoon which came at the conclusion of stage one with Logano running in the 15th position. Quick pit work by the Shell-Pennzoil crew netted a gain of five positions for the team on the first stop, positioning Logano to restart in the 10th position to begin the second stage of the event. Through the second stage, the handling was still too tight in the center of turns three and four, resulting in Logano dropping back to the 14th position by lap 110. Logano concluded the second stage in the 14th position, reporting that the car had developed a loose condition on throttle, but maintained the tight handling issues in the center of the turns. Gordon elected to adjust with wedge and air pressure on the second stop of the day, unfortunately, a lugnut jammed in the gun on the stop, resulting in the loss of four positions. Logano would move forward from the 18th position, climbing as high as 14th in the opening portion of the final stage. However, by lap 178 he had dropped back to the 19th position, reporting that the Shell-Pennzoil Ford was handling worse than it had all afternoon. On the third pit stop at lap 231, Gordon elected to go back on all the previous changes, making a bigger swing at wedge and air pressure adjustments. Logano restarted in the 17th position with 77 laps remaining, moving to the 16th position on the initial start before a quick debris caution flew. Logano reported that he was finally rotating the center of the corner and was only slightly free off. Running as one of the last cars on the lead lap, Gordon elected to bring Logano to pit road for four fresh tires. On the restart, Logano moved to the 15th position, reporting the car was better directionally despite taking off on the splitter. The team pitted one additional time for four tires and air pressure, and Logano finished the race in the 12th position.

Quote: “We really struggled today. We didn’t have enough center turn and that hurt our lap times pretty bad. In the third stage we started making some progress on it but it took some really big changes to do that. We’ll move forward and go to Homestead and try to put our Shell-Pennzoil Ford in victory lane one more time in 2017. Happy for Brad and the No. 2 team to have made the championship four.”

TIL NEX TITME, I AM STILL WORKING ON MY REDNECK!