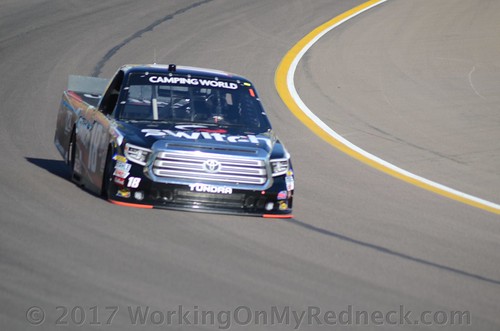 The final race of the season at Homestead-Miami (Fla.) Speedway can mean a lot of different things for different drivers. For one driver, it will culminate in a championship and having his name in the NASCAR history books. For some, it’s putting a disappointing season behind them to start with a clean slate in 2018. For Las Vegas native Noah Gragson, the season finale falls somewhere in between. While not in contention for the 2017 championship, his rookie season has been full of highs and lows, which is expected for most young drivers moving up into a new series. The 19-year-old has learned from his experiences, both bad and good, and is already looking toward the future.

Gragson had his share of defining moments in the No. 18 Switch Tundra during his rookie season. He notched his first win in the NASCAR Camping World Truck Series (NCWTS) last month at Martinsville (Va.) Speedway and earned the coveted grandfather clock. He nearly won with a second-place finish on the road course in Canada. He also showed impressive speed by winning three poles at Texas Motor Speedway in Fort Worth, Iowa Speedway in Newton and New Hampshire Motor Speedway in Loudon. He has led 187 laps so far and hopes to add at least one more to that total Friday night, leading the final lap.

It has been a steep learning curve for Gragson facing a variety of new tracks and figuring out the aerodynamics of racing a truck. It’s also a challenge to learn how to race against a new group of competitors in the NCWTS. This is not just any group of competitors either, it’s an interesting mix of wily veterans like Matt Crafton and Johnny Sauter, other rookies such as Chase Briscoe and Grant Enfinger, and even his own Kyle Busch Motorsports teammate, Christopher Bell. He was learning all of this while also completing his high school degree in April.

Friday night’s race is a milestone for Gragson. Whether he wins the finale, or not, he has many achievements to be proud of this season and many more to come in the future. It’s like the end of the school year, but without yearbooks to sign. Some of his competitors, like Bell, will be moving on to start his higher education in the NASCAR XFINITY Series. His fellow rookie classmates look ahead to their sophomore year where they won’t be the underclassmen any longer. But as the drivers part ways for a few months off, they are already looking ahead to the start of the 2018 season.

You made your second NCWTS start at Homestead last year. What did you learn from that experience?

“It was my first race on a mile-and-a-half track and I really didn’t understand the aero, dirty air and side drafting yet, so going back this year I’ll have more of an idea of what to expect and how to prepare going into the race. I learned all night and got better on my restarts, so it was a productive race for me. I can definitely use that knowledge for this race on Friday.”

Knowing there are four drivers racing for a championship, will you race them any differently?

How would you recap your 2017 season?

“We’ve had speed, we’ve had three poles and we’ve got a win checked off the list, so now it’s all about trying to prepare for the future. Looking back on it, we’ve had a lot of highs and lows, probably more lows than highs, but I’ve become a much different driver over the course of this season. I’ve grown a lot and feel like I’ve improved a lot from the beginning of the year. I am always trying to learn from the mistakes I made earlier in the year and not make them again. I definitely want to end the season on a high note with another win Friday night.”

With one race to go, how would you recap your 2017 season?

“I feel like it’s been a really good year from where we started at Daytona. It was my first year here at KBM too, so I had to learn the team and work on my communication with Noah. It’s been a good turnaround from the first four, or five races. We’ve been solid here at the end of the year and I think that we can continue that this weekend.”

KBM-041: The No. 18 Switch team will race KBM-041, for Friday’s race. Gragson raced this Tundra at Bristol Motor Speedway and Dover International Speedway earlier this year. Kyle Busch won in this truck at Chicagoland Speedway in 2016.

Richmond has two top-five and three top-10 finishes in 10 starts as a NCWTS crew chief at Homestead. His best finish was third with Timothy Peters in 2013.