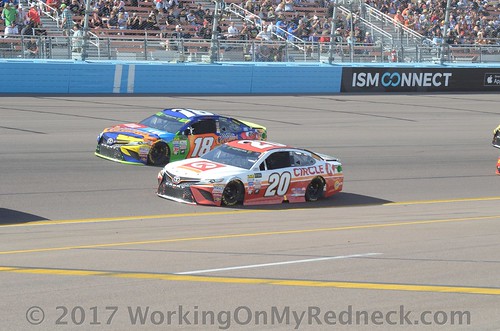 In what could be his final Monster Energy NASCAR Cup Series race at Phoenix Raceway, Matt Kenseth, driver of the No. 20 Circle K Toyota for Joe Gibbs Racing, passed a desperate Chase Elliott in the closing laps to win Sunday’s Can-Am 500 in front of a sellout crowd.

“It couldn’t be any sweeter,” said Kenseth, who announced this week he would be stepping away from racing in 2018. “I just don’t know how to explain it. We needed to go out and get the job done and get us a win. We were able to do that today, We got one race left and (this is) a great way to go out. I’ve been so incredibly blessed my whole career and have had so many great people work with me.”

This was Kenseth’s second Monster Energy Series win at Phoenix, his first coming in 2002. In 30 starts, he has seven top fives and 12 top 10s. He also has one NASCAR XFINITY Series win in the Valley of the Sun in 2006.

For about 20 laps, it looked as though the “win and you’re in” mantra would come true for Chase Elliott as he passed Kenseth after a lap-283 restart. Elliott was also a part of the reason for that caution, as contact between him and No. 11 Denny Hamlin led to Hamlin losing a tire and hitting the wall on lap 281. The two drivers had a run-in two weeks ago in Martinsville Speedway, when Hamlin turned Elliott for the race lead.

Elliott appeared to be headed towards claiming the final Championship 4 spot, but his car faded as the laps went on, and Kenseth quickly caught up and passed him with 10 laps remaining. Elliott finished second, but came up short in advancing to Homestead-Miami Speedway.

Brad Keselowski, who started 16th in the No. 2 Miller Lite Ford, struggled from the beginning of the race. After Hamlin’s wreck, he had a comfortable points cushion, though contact on the last restart made the situation a little more worrisome. Keselowski finished 16th and earned the last Championship 4 slot.

“It kind of just feels a little bit like Christmas,” said Keselowski, the 2012 Monster Energy Series Champion. “Sometimes, you need a little luck on your side. Today we had that. It wasn’t, by any means, where we wanted to run. We wanted to run up front and have a shot for the win, but that wasn’t in the cards. We tried to just run the smartest race we could and survive, and it ended up paying off in the end. Homestead is a lot different than Phoenix. Hopefully, we can find what we need to be able to run up front there and catch some breaks, and just win it, hands down.”