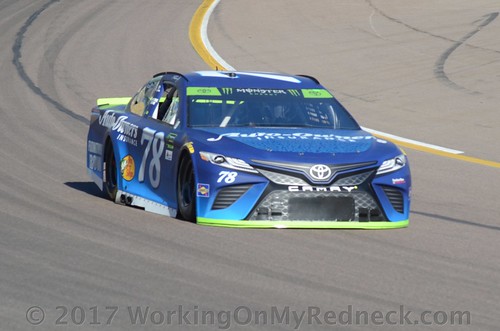 “We go into each race with the same attitude and that is to be a contender for the win,” said Truex. “You can’t turn it off and on in this sport. We’ve had trouble at this track in the past but had a good game plan coming in.

“We stuck with the plan all weekend and we were right there all day. It was a good day for Furniture Row Racing (teammate Erik Jones finished fourth) and I hope this put a smile on the face of our owner Barney Visser. We’re all thinking of him during his recovery.”

Truex will close out the 2017 season next Sunday at Homestead-Miami Speedway as one of the Championship 4 drivers vying for the season title. He will be joined by Kyle Busch, Kevin Harvick and Brad Keselowski. The driver who scores the best finish among the four finalists will be crowned the NASCAR Cup Series champion.

“We’re all excited about going to Homestead with the opportunity of winning the championship,” stated Truex. “This is what we set out to do at the beginning of the year.”

Truex, who started the Phoenix race fifth in the blue No. 78 Auto-Owners Insurance Toyota Camry, powered by a TRD engine, basically ran in the top-five for the entire race.

“We were right there all day long,” said Truex. “Had a sniff at the lead a couple times – just couldn’t quite get it – but I’ve got to say I’m so proud of (race winner) Matt (Kenseth) and his team and the year they’ve had and really the position they’re in right now. To go out and win that race was unbelievable, so I was really, really happy for him. He did an awesome job.”

Take away the Talladega wreckfest race, Truex’s average finish in the other eight playoff races is 2.37.