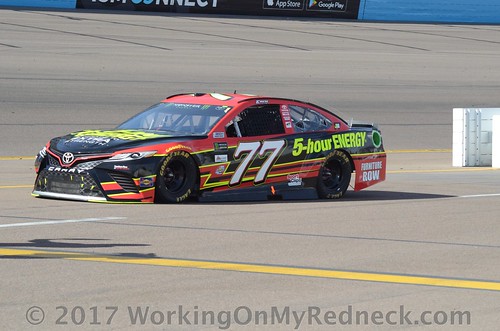 The 21-year-old series rookie kept alive a streak of now 12 consecutive top-10 finishes in as many starts on the one-mile oval, including two victories in the Camping World Truck Series. He finished eighth in the Cup race in March.

Jones also moved up on spot, to 18th, in the NASCAR Cup Series point standings after 35 races. His 847 points is 47 points behind Joey Logano for 17th, two ahead of Clint Bowyer for 19th and 73 points ahead of Daniel Suarez in 20th.

“Today was a good day for us,” said Jones. “The 5-hour ENERGY Camry was good. Definitely had the speed to run up front and contend for the win – so thanks to TRD for that – but I just didn’t really execute 100 percent on the last restart to really give myself the shot I needed. Kind of a bummer, but overall really strong day for us – another day we needed. It had been a minute since we had really ran in the top-five competitively and had a shot and that is what we did today. Nice to get back on track. Nice momentum for next week and hopefully being able to close the season out with a win.”

Jones was a mainstay in the top 10 throughout the 312-lap race. After starting 11th, he finished seventh in Stage 1 and third in Stage 2 despite chasing the handling of the No. 77 5-hour ENERGY Toyota from tight to loose and back again.

Crew chief Chris Gayle called for a 2-tire stop under caution on Lap 256 while running fifth. Most of the leaders stayed out so Jones restarted 11th with just more than 50 laps remaining. He was back to fifth by Lap 273 and into fourth on Lap 275. He crossed the finish line just behind Furniture Row Racing teammate Martin Truex Jr.

The race had seven cautions for 41 laps and one red flag for five minutes. There were nine lead changes among five drivers.

The final race of the 2017 NASCAR Cup Series is Nov. 19 at Homestead-Miami Speedway.