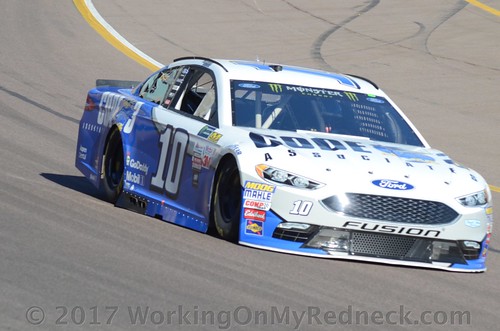 ● The No. 10 Code 3 Associates Ford Fusion team struggled from the drop of the green flag, and Patrick was scored 33rd at lap 50.

● The Code 3 Associates Ford fired off better in Stage 2, and Patrick was able to gain several positions.

● The team pitted between stages at lap 154 for tires, fuel and adjustments.

● Patrick ran as high as 26th before making contact with the outside retaining wall just after lap 200. The team pitted under green-flag conditions at lap 223 for tires, fuel, adjustments and repairs, which put the No. 10 Code 3 Associates Ford back to the 31st position. Scott called for Patrick to wave around when the caution flag came out at lap 228.

● The team pitted under caution at laps 240, 256 and 277 for tires, fuel and adjustments. In the closing laps, Patrick was able to gain several positions and took the checkered flag in 25th.

● Patrick earned 12 points in Sunday’s race at Phoenix Raceway, which puts her at 510 total points for the season thus far. She is ranked 27th in the driver point standings.

● Matt Kenseth won the Can-Am 500k to score his 39th career Monster Energy NASCAR Cup Series victory, his first of the season and his second at Phoenix Raceway. His margin of victory over second-place Chase Elliott was 1.207 seconds.

The next event on the Monster Energy NASCAR Cup Series schedule is the Nov. 19 Ford EcoBoost 400 at Homestead-Miami Speedway.