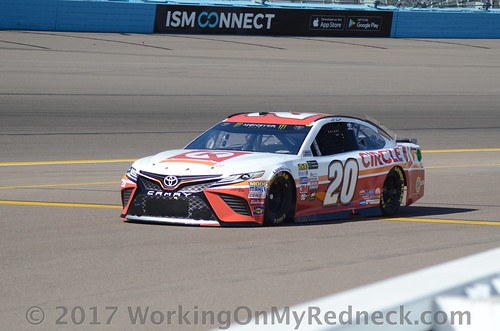 The middle-aged man without a ride for 2018 drove a dagger through the heart of the youngster expected to shine in the Monster Energy NASCAR Cup Series for years to come.

With nine laps left in Sunday’s Can-Am 500 at Phoenix Raceway, 45-year-old Matt Kenseth passed 21-year-old Chase Elliott for the lead and pulled away to win for the first time since the July 2016 New Hampshire race, breaking a 51-event winless string.

Kenseth’s victory, the 39th of his career, deprived Elliott of a chance to run for the series championship next Sunday at Homestead-Miami Speedway and kept Chevrolet out of the title race. The win also was a gift to Brad Keselowski, who survived a lackluster afternoon with enough points to advance to the Championship 4 event.

Resigned to a hiatus from NASCAR racing after Erik Jones takes his seat in the No. 20 Joe Gibbs Racing Toyota at the end of the year, Kenseth won at Phoenix for the second time and provided a rare show of emotion in Victory Lane.

“Yeah, it’s really not describable,” Kenseth said. “With only two (races) left, I didn’t think we probably had a good chance of getting back to Victory Lane. It’s been, I don’t know how many races – somebody’s probably going to tell me tonight – but it’s been at least 50 or 60, so it’s been a long time.

“We’ve had a lot of close ones. Just felt like it was never meant to be, and today it was meant to be…. I’ve got to be honest with you, I never dreamed I’d win one of these races, so obviously I’ve been so incredibly blessed throughout my whole career.”

Elliott has had some painful runner-up finishes this season—running second five times in his quest for a first career victory—but the sting of this one was especially severe. After squeezing Playoff contender Denny Hamlin into the outside wall on Lap 270, Elliott grabbed third place before Hamlin blew a tire and shot into the Turn 3 wall on Lap 275, his race and his championship run were over.

One lap after the final restart on Lap 282, Elliott passed Martin Truex Jr. for second. One circuit later, he shot past Kenseth through Turns 3 and 4 for the lead and began to pull away. As the run continued, however, Kenseth closed the gap. On Lap 303 of 312, he cleared Elliott off Turn 2 and stretched his advantage to 1.207 seconds at the finish.

“We were so close to having another shot next week,” Elliott said. “But, man, I can’t say enough for our team and our Hooter’s Chevrolet this weekend. We fought really hard today and gave ourselves a chance. Our car was really fast on those short runs after a caution and after pit cycles on tires. It fired off really good, and we did pretty good on the short run all day and got really tight as the run went long.

“And once the rubber laid back down, I was just hanging on and hoping I could get to traffic before (the car) started going away. It’s just such a bummer. I was telling my guys we’ll get it right someday, or I’ll get it right someday. We’ve had so many good opportunities, and at some point, we’ve just got to close.”

Hamlin had led 193 laps before his run-in with Elliott. The two drivers had a recent history, with Hamlin depriving Elliott of a possible victory and a Championship 4 berth by knocking him into the Turn 3 wall with fewer than four laps left two weeks ago at Martinsville.

Keselowski, who muscled an ill-handling car to a 16th-place finish and beat polesitter Ryan Blaney (17th Sunday) for the final berth in the championship race, moves on to Homestead to battle Kevin Harvick, Martin Truex Jr. and Kyle Busch for the series title. Truex, the series leader, finished third on Sunday in front of Jones and Harvick.

Jimmie Johnson, who like Elliott needed a victory to advance to Homestead, blew his right front tire and crashed out of the event on Lap 150, ending the day in 39th place.

Check out the unofficial results of the Can-Am 500k.