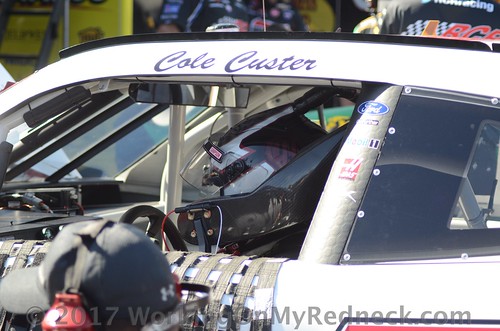 ● Custer ran in the top-10 for the entirety of the Stage.

● He said the Haas Automation Ford’s balance improved as the stage wore on, but could use an adjustment to become tighter.

● He pitted for four tires, fuel and air pressure adjustments at the conclusion of the stage.

● Custer battled a loose-handling condition at the beginning of Stage 2.

● He continued to run inside the top-10 for the duration of the stage.

● At the conclusion of the stage, Custer gained three spots after a pit stop for four tires, fuel and chassis adjustments.

● Custer noted loose-handling conditions late in the run causing him to fall to the eighth position.

● Custer piloted his Haas Automation Ford Mustang to fifth place, putting him above the cutoff for the Championship Four.

● During the closing laps, Custer was caught pushing him to the seventh position and below the cutoff.

● Custer was eliminated from the NASCAR XFINITY Series Playoffs. He finished in fifth place, just four points below the cutoff for the Championship Four.

● This was Custer’s 36th NASCAR XFINITY Series start and his second at Phoenix Raceway.

● William Byron won the Ticket Galaxy 200 to score his fourth career XFINITY Series victory, fourth of the season and first at Phoenix. His margin of victory over second-place Ryan Blaney was .960 seconds.

“We fought hard all day and did all we could to compete for a spot in the Championship Four. We have had fast Haas Automation Mustangs all year and just ran into bad luck in the second round of the playoffs. We would be in the final round if it weren’t for that bad luck. For a first-year team, rookie driver and rookie crew chief we competed at a high level. A huge thanks to everyone at Stewart-Haas Racing, Haas Automation, Ford Performance, Code 3 and everyone who has supported us this season. I’m sure we’ll come back next year stronger.”

Failed to advance to the Championship 4:

The next event on the NASCAR XFINITY Series schedule is the Ford EcoBoost 300 on Saturday, Nov. 18 at Homestead-Miami Speedway.