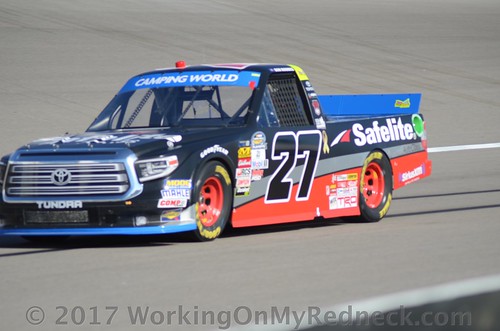 Currently fifth on the NASCAR Camping World Truck Series Playoff Grid – five points behind Austin Cindric for the final Championship 4 points berth – Ben Rhodes has some work to do to race for the series crown.

He’ll need to make up that ground in Friday’s Lucas Oil 150 Round of 6 cutoff race at Phoenix Raceway.

In two career starts at the one-mile track, Rhodes has finished fifth (2014) and 14th (2015). He enters Friday’s race after posting Round of 6 finishes of ninth at Martinsville and 18th at Texas.

“To beat everyone else sounds simple, but it’s going to be quite the challenge,” Rhodes said. “ThorSport Racing has given me some unbelievably fast Toyotas in the past, so I know I can count on that same speed Friday night.

” It will come down to keeping (my truck) clean, having great pit stops, and running up front – especially ahead of the 19 (Austin Cindric) – all night. I know we are more than capable of getting a win, and I’ll do what it takes to make that happen.”