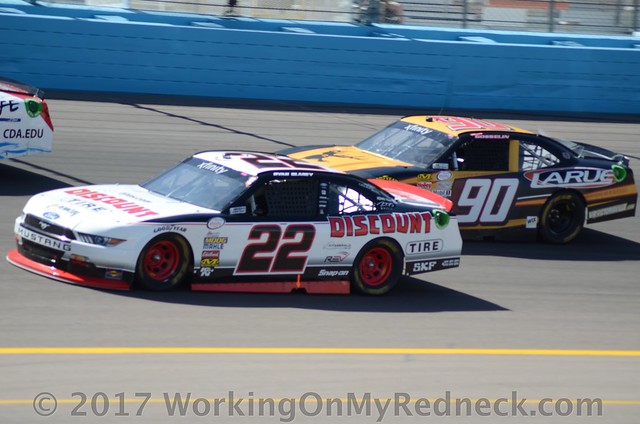 Recap: Ryan Blaney started fourth and finished second in Saturday night’s O’Reilly Auto Parts 300 at Texas Motor Speedway with the No. 22 Discount Tire Ford Mustang. On the initial start, Blaney struggled in the non-preferred outside lane, dropping several positions in the opening laps. Throughout the first stage, Blaney battled a Ford Mustang that was loose on corner entry, but was able to move forward back to the fourth position where he’d conclude the opening stage. On the stop, crew chief Greg Erwin adjusted with wedge, sending Blaney back to the track to restart in the fifth position. In the opening laps of the second stage, Blaney communicated to the team that he was able to run the bottom lane better than the cars in front of him. The 23 year-old-driver would use that advantage to survive several chaotic restarts and also pass cars under green flag conditions which prove difficult on the repaved and reconfigured 1.5-mile oval. At lap 83, crew chief Greg Erwin elected to bring Blaney to pit road for four tires and fuel, putting the team in position to cycle to the lead at the end of the second stage. Blaney was able to drive the No. 22 Discount Tire Ford from 12th to eighth position by the end of the stage, and would restart as the leader for the third and final stage. Once Blaney checked out from the field in clean air for the first time of the night, he reported the handling of the No. 22 Mustang to be looser than previous runs. Blaney would pit from the lead at lap 128 for four tires, fuel and a considerable wedge adjustment to the Discount Tire Ford. The No. 22 Ford Mustang was the fourth car off pit road but the first with four tires. Blaney quickly worked his way to the second position and began running down race leader Erik Jones who had hacked out to a nearly three second advantage on the field. At lap 185, crew chief Greg Erwin called Ryan Blaney to pit road for a fuel only stop, sending the No. 22 back out in the second position, right behind the No. 20 of Jones. Blaney would ultimately bring the No. 22 Discount Tire Ford Mustang home in the second position, helping build on the team’s lead in the NASCAR XFINITY Owners Championship race as they look to secure a spot in the championship four in hopes of winning Team Penske’s fourth owner’s title.

Quote:  “I thought our car was good from the beginning. I was pretty loose to start but once we got it tightened up I thought we were really good. I thought the track took another swing free with maybe 60 to go and got our car looser again but we were still able to run down the 20 and get to him but we just couldn’t pass him. Couldn’t pass anybody. Lap cars were all over the place. I thought it was a good night for us. It just stinks we couldn’t get around him. I thought we had a shot after the green-flag stop. I thought we were way better but we got held up a couple times by traffic. I thought we had the car to win, just a matter of trying to get in front of him and I couldn’t pass anybody. I tried to get him loose a couple times and couldn’t do it. I about wrecked myself trying to get him loose. It is really hard to get around anybody. Hopefully that gets a little better for tomorrow.”