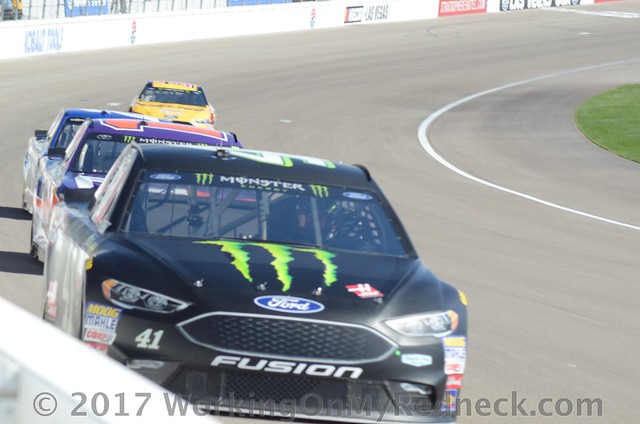 Tony Stewart had enjoyed unique status at Texas Motor Speedway – until Friday afternoon, that is.

Before Monster Energy NASCAR Cup Series Coors Light Pole Qualifying for Sunday’s AAA Texas 500 at the 1.5-mile track, Stewart had been the only driver to run a time trials lap at 200 mph or more, a feat he accomplished in the second round of knockout time trials on Oct. 31, 2014.

But Kurt Busch topped them all, covering the distance in 26.877 seconds (200.915 mph) to set a qualifying record not only at Texas but also for any 1.5-mile intermediate speedway.

Though there’s no speed trap at the entrance to Turn 1 – as there is at Auto Club Speedway in Fontana, Calif., for instance – Busch’s No. 41 Stewart-Haas Racing Ford had to be approaching 220 mph before he lifted for the first set of corners.

“(Turns) 3 and 4 is an incredible sensation,” Busch told the NASCAR Wire Service. “Once the car goes into the banking, it travels. The suspension collapses in the car and the car gets lower to the ground and picks up speed because you are lower to the ground and have less drag. It’s a sensation that’s hard to describe. When you have that grip level in the car, it gives you the feeling that you can just put it down to the floor and there won’t be any consequences.

“Turns 1 and 2 are where I think the lap times come from, if you can get it to hook and stay right on the bottom, because that end of the track is a lot flatter. You have to back out of the gas all the way. Then in 3 and 4, you can hold it wide open. Both ends of the track are very different. It’s a cool sensation going through 3 and 4 almost holding it wide open.”

For Busch, the speed in his car held up in race trim. In much warmer conditions, he was fastest in Saturday’s first practice session, posting a lap at 191.788 mph.