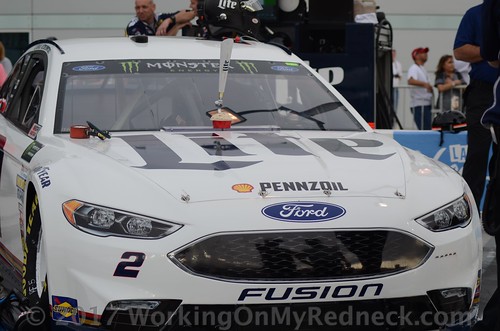 Team Penske and Discount Tire announced today that beginning in 2018, the world’s largest independent tire and wheel retailer will build on its established and successful partnership with the motorsports team and become a primary sponsor of the No. 2 Ford Fusion driven by 2012 champion Brad Keselowski in the Monster Energy NASCAR Cup Series (MENCS).

Under the new multiyear agreement, Discount Tire will provide primary partnership bookends to the 2018 MENCS season, beginning with the Daytona 500 at Daytona International Speedway in February and concluding with Ford Championship Weekend at Homestead-Miami Speedway in November. Discount Tire will be featured as the primary sponsor of the No. 2 Ford for 10 races while continuing to serve as a prominent associate sponsor for the remainder of the schedule. Discount Tire will also continue as a primary sponsor of the No. 22 Ford Mustang in the NASCAR XFINITY Series (NXS) for multiple races in 2018 and beyond.

“Team Penske has enjoyed tremendous success with Discount Tire over the past eight seasons in the NASCAR XFINITY Series,” said Roger Penske. “We won our first NASCAR championship together with the 2010 XFINITY Series title and the company will always have a special place in our history. We are excited for a new challenge with Discount Tire as we look to build on that success with Brad and the No. 2 Ford Fusion in the NASCAR Cup Series.”

The partnership between Discount Tire and Team Penske began in 2010 with the No. 22 NXS team that won six races and established a series record with 26 top-five finishes on its way to the championship won by Keselowski. The relationship continued to produce titles as the No. 22 Discount Tire team earned three-consecutive NXS Owners’ Championships from 2013-2015. In total during their partnership, five Team Penske drivers have won 33 NXS races in a Discount Tire-sponsored entry, with Keselowski leading the way, posting 23 victories. The No. 22 team is also currently leading the NXS Owners’ Point Standings with three races remaining in the season.

“Our partnership with Team Penske has been incredibly successful during an exciting time for our company,” said Discount Tire Chairman Bruce T. Halle. “Roger and his team have been wonderful to work with, and of course, all of the wins and championships are fantastic. As we continue to expand Discount Tire across the country, we look forward to celebrating more successes with Brad and all of Team Penske as together we pursue the Monster Energy NASCAR Cup Series Championship.”

“Discount Tire has been an important part of my racing life for a long time now,” said Keselowski. I am proud of what we have been able to accomplish together and of the relationships I have built over the years. It will be like coming full circle next year, as many of the current guys on the No. 2 Cup team were also with me during our 2010 XFINITY Championship run. It’s great to see this partnership continuing into the Cup Series while still maintaining an important place in the XFINITY Series.”

The 2018 NASCAR Cup Series regular season begins with the 60th anniversary running of the Great American Race, the Daytona 500, on Sunday, February 18.

About Team Penske
Team Penske is one of the most successful teams in the history of professional sports and celebrated its 50th Anniversary in 2016. Cars owned and prepared by Team Penske have produced more than 470 major race wins, over 540 pole positions and 30 National Championships across open-wheel, stock car and sports car racing competition. In its storied history, the team has also earned 16 Indianapolis 500 victories, two Daytona 500 Championships, a Formula 1 win and overall victories in the 24 Hours of Daytona and the 12 Hours of Sebring. Team Penske currently competes in the Verizon IndyCar Series, the Monster Energy NASCAR Cup Series and NASCAR XFINITY Series. The team also races in the Virgin Australia Supercars Championship, in a partnership with Dick Johnson Racing, as DJR Team Penske. For more information about Team Penske, please visit www.teampenske.com.

About Discount Tire
Discount Tire, based in Scottsdale, Ariz., is the world’s largest independent tire and wheel retailer. Founded in 1960 by Bruce Halle, the company does business under the trade name Discount Tire in most of the U.S., America’s Tire in parts of California, and as Discount Tire Direct in markets outside the reach of our retail stores. The company currently serves customers as their trusted neighborhood tire retailer at 950 stores in 34 states across the country. Discount Tire sponsors the Monster Energy NASCAR Cup Series, the NASCAR XFINITY Series and Monster Energy AMA Supercross. For more information about Discount Tire, visit discounttire.com. Like us on Facebook atwww.facebook.com/discounttire.