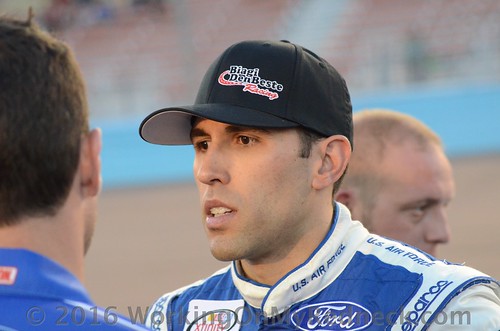 The garage rumor mill has it that Aric Almirola will be replacing Danica Patrick in the Stewart-Haas Racing No. 10 car next season.  Additionally, new SHR sponsor Smithfield also has agreed to continue a relationship with Richard Petty Motorsports, sources said.

Almirola has been somewhat vague while stating that he was continuing to work on his 2018 plans, and SHR has announced that it would hold a news conference Wednesday morning to introduce the driver of its Smithfield-sponsored No. 10 car.

Smithfield, which has sponsored Almirola for the past six seasons at RPM, announced in September that it would move to SHR in 2018 but did not announce a driver. At the time, Almirola would not say what his 2018 plans were but just that he would not return to the Petty team.

FYI: SHR has announced in the last few days that their NXS team would merge/partner with Biagi-DenBeste, of which Almirola drove several races for over the past few years.

So do not be surprised when SHR announces that Aric Almirola will be in their No. 10 Ford Fusion in 2018.