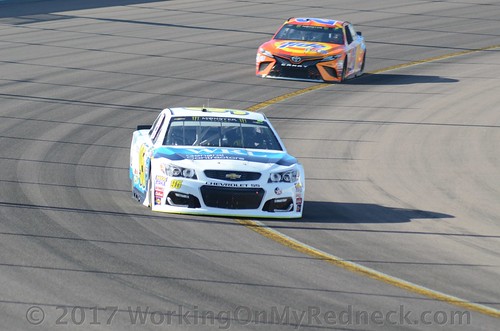 Leavine Family Racing (LFR) and Michael McDowell will celebrate their homecoming at Texas Motor Speedway for the AAA Texas 500.

During the team’s last trip to Texas in April of this year, they just missed the final round of qualifying for the O’Reilly Auto Parts 500 and captured a 13th place starting position. McDowell’s best finish at Texas in the Monster Energy NASCAR Cup Series (MENCS) is a 23rd place finish earned in 2016. He matched that finish in the most recent Texas race in April of this year.

This week, McDowell will once again pilot the No. 95 Rohto® Jolt™ Chevrolet SS, as he looks to improve on his finish from earlier this year.

“It feels like it has been so long since we have been to Texas, but we were super fast there earlier this year,” said McDowell. “We almost made it to the third round of qualifying and had a really strong car. We just missed it a little in the race, but it was still a really solid race for us. We are really looking forward to this race just because of how quick we were last time.”

McDowell is looking forward to racing at Texas, where he has had success, but knows this trip to the Lone Star state will be an emotional one.

“It’s also a hometown race for Bob, Sharon and everyone at WRL, so I always feel a little extra pressure,” continued McDowell. “It’s going to be a special weekend for me since I won’t be back with this team next year. I’m looking forward to seeing all our friends and family and enjoying my time with everyone.”

The AAA Texas 500 will take place on Sunday, November 5 at 2PM ET. Race fans can tune-in to NBCSN for live coverage and follow @LFR95 on Twitter for team updates.