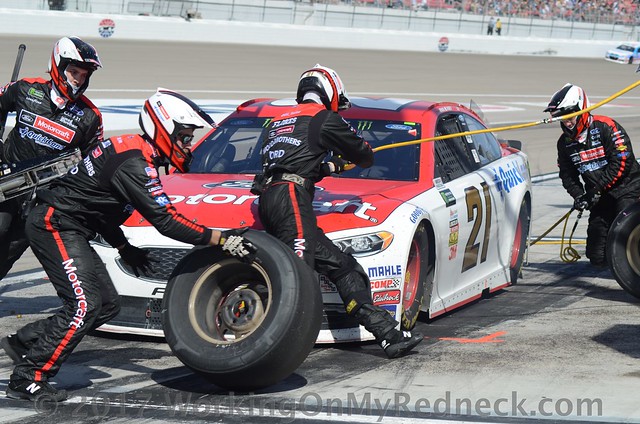 As Ryan Blaney and the No. 21 Motorcraft/Quick Lane team prepare for the second of three races in the Round of Eight in the Monster Energy Cup playoffs, the goal remains essentially the same as it’s been for every race this season.

That means it’s essential to qualify up front, earn as many stage points as possible in the first two stages of the race, then go all out to the checkered flag.

While many in the sport may have initially underestimated the importance of stage points, which were introduced this year, Blaney and the Motorcraft/Quick Lane team have been pursuing them with a vengeance since the start of the season.

Blaney has scored stage points in 25 of the 33 races run this season for a total of 212 points. He’s eighth among all drivers in stage points earned and sixth among the eight drivers still in the running for the championship.

He’s earned stage points in five of the seven playoff races to date, and his 29 stage points earned in the Round of 12 played a big role in his advancement to the current Round of Eight.

“The stage points are huge,” Blaney said during a media appearance at Martinsville Speedway. “They’re gigantic.  Hopefully, we can gather a bunch of those, but I’m not really sure how many it’s going to take [to advance to the final round].

“You can probably run 10th in every single race in this round and not advance. Stage points matter. I think you’re going to have to get at least 12-15 stage points a race and finish inside the top 10 just to even have a prayer because the competition is so good right now.

“It’s eight of the best cars.”

And Texas, a track that is similar to Kansas, has been good to Blaney as well as he swept both stages in April’s 500-miler.

“I think our run at Kansas shows that we may be a really good car at Texas because I think we won both stages there in the spring,” Wood said. “So let’s hope we’re peaking at the right time.”