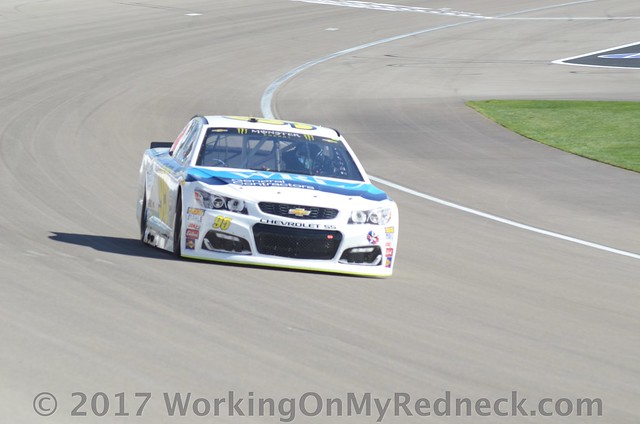 Leavine Family Racing (LFR) and Michael McDowell earned their 15th Top-20 of the season as they rallied back from early race trouble at Martinsville Speedway.

McDowell started his run off strong before he and another driver made contact to bring out a caution. He acquired right front damage along with a flat right front tire. As McDowell pitted to fix the damage, the team raced against the five-minute damage repair clock that could have proven detrimental if the clock were to expire before the team finished repairs.

Fortunately, the team fixed the damage in the allotted time, but went down a lap down in the process. McDowell would also be forced to restart from the rear of the field due to a speeding penalty on pit road.

Although the damage caused McDowell to go down a lap, he earned the Lucky Dog spot when a caution came on out lap 88. He was then able to finish the stage in 23rd as his brakes began to fade.

McDowell then fought a loose-handling car during the second stage, but was able to finish the stage in 26th before pitting under caution. He began the final stage in the same position and raced until a caution came out on lap 302. McDowell then reported he was beginning to feel his brakes fade on his No. 95 Rohto® Jolt™ Chevy even more, but stayed out under caution.

Soon after the restart, another caution flag quickly fell, allowing McDowell to pit for tires and adjustments. He restarted 21st and raced until lap 360 before reporting continuous brake issues and lack of overall drive off. He pitted two laps later for four tires and minor adjustments.

With just over 100 laps remaining, McDowell reported that he felt like his sway bar broke, but was able to maintain position. The team later determined it was a sway bar link and arm that broke.

McDowell made his final pit stop under caution with 10 laps remaining and avoided another late caution to finish 19th, earning LFR’s 15th Top-20 finish of the season.

“It was a hard fought day for us, that’s for sure,” said McDowell. “We were hoping for a little more, but we had to overcome a lot. We got some damage really early on, got a penalty, and had to gain a lap back. Not a bad finish for us overall and another Top-20 for the team.”

Next up for McDowell and LFR is Texas Motor Speedway, the home track of LFR team owners and partners.