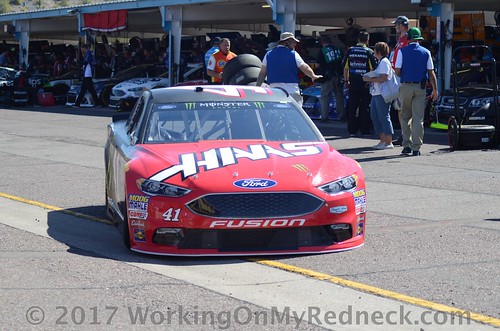 ● The State Water Heaters Ford had a loose-handling condition during the opening laps of the First Data 500 at Martinsville Speedway.

● Busch pitted under caution on lap 87 for wedge adjustments and tires. He restarted 20th after the top-nine cars opted not to pit.

● At the end of the stage Busch pitted from the 12th position and was able to maintain his spot coming off of pit road.

● On the Stage 2 restart Busch reported that he might have received right-front damage after slight contact, but the State Water Heaters spotter noted that everything looked good, so the team did not have to make an additional stop.

● Busch maintained his 11th-place run throughout a caution-free Stage 2.

● At the beginning of the final stage, Busch came in for four tires and fuel. Busch was satisfied with his State Water Heaters Ford and did not request adjustments.

● Busch was forced to check up due to traffic on the subsequent restart, relinquishing the 11th spot to Jimmie Johnson.

● The handling on Busch’s Ford began to deteriorate over the course of the stage, dropping the driver to 16th.

● On lap 460 the State Water Heaters team gained one spot on pit road, restarting 15th and quickly jumping to 12th.

● In overtime Busch was caught up in a multicar incident that dropped him to a 22nd-place finish.

● Twenty-three of the 40 drivers in the First Data 500 finished on the lead lap.

● Kyle Busch won the First Data 500 to score his 43rd career Monster Energy NASCAR Cup Series victory, his fifth of the season and his second at Martinsville. His margin of victory over second-place Martin Truex Jr. was .141 of a second.

● Busch leads the playoff standings via his win and has 4,100 points. Truex leads the points standings with 4,117.