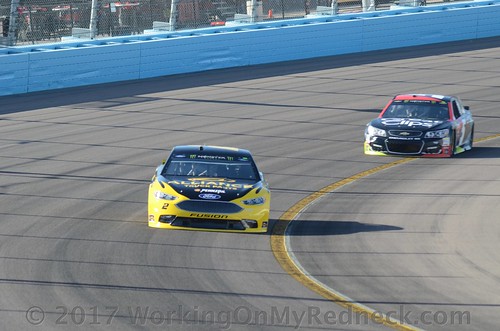 Brad Keselowski came close to calling his own shot.

Coming to Martinsville Speedway, the driver of the No. 2 Team Penske Ford termed Sunday’s First Data 500 a ‘must-win’ event, uncertain of his organization’s ability to keep up with the Toyotas at downforce tracks like Texas.

And with eight laps left in regulation distance at the .526-mile short track, Keselowski was cruising toward a victory in the Monster Energy NASCAR Cup Series Round of 8 opener and a ticket to race for his second series title at Homestead-Miami Speedway.

But teammate Joey Logano had developed a severe tire rub after contact from race winner Kyle Busch’s Toyota, and on Lap 492, the tire went flat and Logano went spinning, causing the 10th caution of the race.

Chase Elliott muscled his way past Keselowski on the subsequent restart on Lap 497, and after Hamlin dropped-kicked Elliott into the Turn 3 wall to force overtime, Keselowski came home fourth.

Yes, the No. 2 Ford won the first and second stages, but the important prize eluded him. Nevertheless, Keselowski chose to accentuate the positive after the race.

“There was a lot of hard fighting here because it’s a short track,” Keselowski said. “That’s what short tracks are kind of about is rooting and gouging. You try not to take anybody out, but you’ve got to sometimes rub a little bit.

“But we had a really great Alliance Truck Parts Ford. We were able to lead laps and win the two stages and bring home a solid finish, and that’s something to be proud of.”

The fourth-place finish did leave Keselowski third in the standings, with a 29-point cushion over fifth-place Jimmie Johnson. The Playoff field will be cut from eight to four drivers in two weeks at Pheonix.