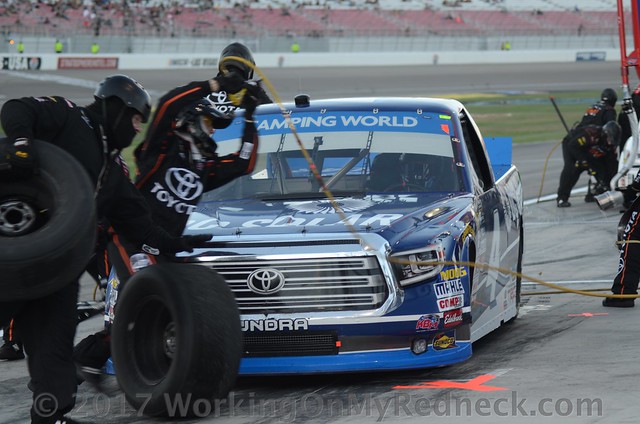 Christopher Bell arrived at Martinsville Speedway on Friday intent on the serious business of trying to win a NASCAR Camping World Truck Series championship, but his victory in last Saturday’s NASCAR XFINITY Series event at Kansas Speedway was still a prime topic of conversation.

With four laps left in the Kansas Lottery 300, Bell pulled a slide job on Joe Gibbs Racing teammate Erik Jones and steered his No. 18 Toyota up to the wall in front of Jones’ No. 20, which plowed into the back of Bell’s Camry.

Set to drive full-time for JGR next season, Bell went on to win in his fifth start, while Jones nursed his wounded car to a 15th-place finish, one lap down. After the race, Jones was critical of Bell’s “dirt-track” move.

After talking to Jones later , however, Bell believes the hatchet is buried.

“Me and Erik – we’re fine,” Bell said on Friday before practicing his Kyle Busch Motorsports Tundra in preparation for Saturday’s Texas Roadhouse 200 Truck Series race at Martinsville. “I reached out to him after the race. We’re fine. Our relationship is kind of how it was before that. There’s no grudges held, at least that I know of.

“I don’t know. I’m a dirt racer, and he’s not a dirt racer, so maybe that was two backgrounds clashing right there. I executed my move exactly how I wanted to do it, and I felt like I left him multiple options to get a different outcome. That’s kind of where I’m going to leave it.”

It’s not that Bell and Jones were bosom buddies before the race, even though both have advanced through the Toyota development pipeline. When Bell starts his first full-time XFINITY season with JGR next year, Jones will move into the seat of Gibbs’ No. 20 Monster Energy NASCAR Cup Series ride.

“As far as mine and Erik’s relationship, we weren’t really, I guess, friends before,” Bell said. “We didn’t talk every day or anything like that. We were acquaintances, so I think that’s going to continue on.

“I made sure that I reached out to him after the race. I tried to smooth things over as good as I can. We’re all here to win. We’re not here to become buddies.”

The Truck Series leader was second fastest in opening practice on Friday behind two-time champion Matt Crafton, who covered the .526-mile distance in 20.129 seconds (94.073 mph) on his 11th and final lap of the session.

TIL NEXTIME, I AM STILL WORKING ON MY REDNEKC!