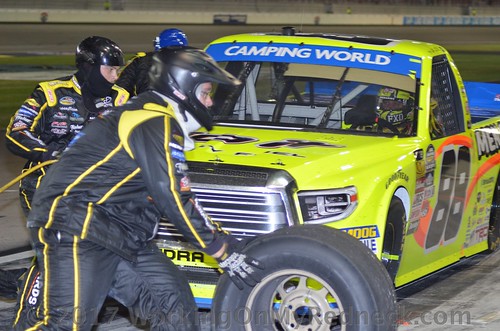 With the win and advance format used in the NASCAR Camping World Truck Series Playoffs, Matt Crafton has to like his chances to advance to the Championship 4 race at Homestead-Miami Speedway.

He has two career wins at Round of 6 tracks Martinsville Speedway and Texas Motor Speedway. In 16 career starts at Phoenix, he has 11 top 10s and a 9.2 average finish.

Crafton opens the Round of 6 with Saturday’s Texas Roadhouse 250 at Martinsville (1 p.m. ET on FS1). In addition to his two wins, Crafton has eight top fives, 18 top 10s and a 10.8 average finish at Martinsville. He has finished ninth or better in the first three NASCAR Camping World Truck Series Playoffs races.

“Racing for championships in the [Camping World] Truck Series, and even back in the Southwest Tour, and late models, you go out there and take care of yourself,” Crafton said. “Race your own race, and see how the cards fall at that point. I know I say it all the time, but I truly believe it, if it’s meant to be, it will happen.”