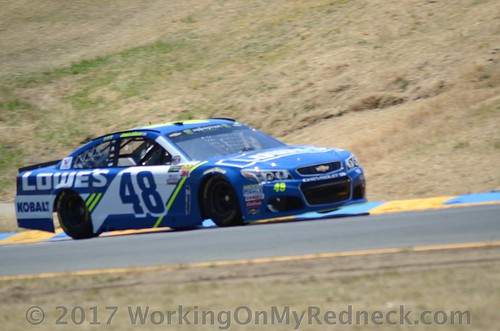 Although he’s tied in points with Kevin Harvick for the final transfer spot to the Monster Energy NASCAR Cup Series Championship 4 race at Homestead-Miami Speedway, Jimmie Johnson feels a higher sense of urgency due to the addition of playoff points to the postseason format.

“It’s not back to zero with all those stage points,” Johnson said. “For us to advance moving forward, we’ve got to win.”

Johnson’s best shot at victory in the Round of 8 is likely Sunday’s round-opening First Data 500 at Martinsville Speedway. The No. 48 Chevrolet driver leads active drivers with nine checkered flags at the Southern Virginia short track and is the defending race winner.

In addition to his nine Martinsville wins, Johnson boasts 19 top fives, 24 top 10s and a series-best 7.5 average finish at Martinsville. He also leads active drivers at “The Paperclip” in driver rating (116.9) and average running position (8.0).

Johnson won last year’s Monster Energy NASCAR Cup Series championship and is chasing a record eighth series title. He is tied with Dale Earnhardt and Richard Petty for the most championships in series history.

“Martinsville is not a bad track for us, so hopefully we can repeat last year’s performance there,” Johnson said. “It’s pretty simple from here on out, we’ve got to get some speed in our cars and we’ve got to win a race.”