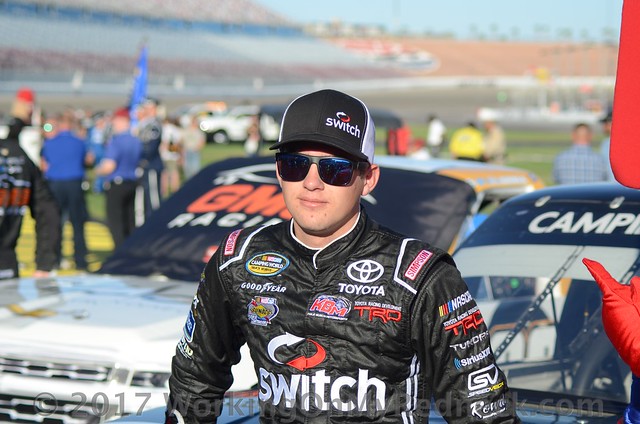 Noah Gragson has been looking forward to returning to Martinsville (Va.) Speedway since April 1 of this year, the first time he raced there in the NASCAR Camping World Truck Series (NCWTS). It was that day when the rookie scored his first top-five finish in his Switch Tundra and after such a competitive race, he was ready to come back and battle for a win.

In the spring race, Gragson started ninth after only having one hour of practice due to rain on Friday. He spent much of the first stage finding a rhythm to get around the flat, paperclip-shaped track. He was up to fifth in the second stage until he was spun from behind by another competitor, but battled his way back up to the front at a track where it is notoriously hard to pass. He was eighth to begin the final stage and finished the race fourth. After that race, he was counting down the days until he could race at Martinsville again.

This will be the first time Gragson returns to a track where he has previous experience in his Switch Tundra. Every track up to this point has been a new experience for the 19-year-old rookie, but this weekend he has a much better idea of what to expect and how to improve. He also has a veteran crew chief in his corner, Marcus Richmond, who already has two wins under his belt at Martinsville. His first victory came with Dennis Setzer in 2008, followed by a trip to Victory Lane with Kevin Harvick in 2012.

With only four races remaining in the 2017 NCWTS season, Gragson still has his sights set on his first win. He came close with a second-place finish on the road course of Canadian Tire Motorsport Park in Bowmanville, Ont., but perhaps his second time around at Martinsville on Saturday will be his race. Winning at Martinsville not only takes a fast truck, but the driver must have a good balance of patience and aggression to protect the track position he has, and gain more. Gragson will have 200 laps around “the paperclip” to see what he can do with his Switch Tundra to end up in Victory Lane.

Will this race be easier since you have one truck race under your belt at Martinsville already?

“The challenge of the race isn’t any easier, but my confidence is higher since I’ll kind of know what to expect this time. I’ve only run once there so I still don’t have that much experience compared to a lot of the other drivers, but it’s still more than I had back in April. Having been there before should help in practice as well. I’ll be able to get up to speed faster after we unload and give more feedback to make the truck even better.”

After you won the Winchester 400, you talked about how excited you were for Martinsville. How do the two tracks compare?

“The two tracks aren’t similar at all, but they are both short tracks. I love short-track racing and feel more confident at them since that is where most of my experience is. It still takes some time for me to get the feel of the intermediate tracks, so when there is a short track on the schedule I definitely have it circled on the calendar. We finished fourth at Martinsville in the spring and ran in third toward the end, so I’m looking forward to going back.”

What do you know about racing at Martinsville now that you didn’t know in the spring race?

“I learned I could make the restarts work on the outside, which I’d never seen anyone do before. I decided to give it a try and it ended up working. I was one of the only guys who could pass on the outside in the spring race, although I’m not sure why it worked for me and nobody else. I also didn’t know how the rubber would lay down on the track throughout the race, so I feel like my notes were really good from this race in April. Hopefully we can make small changes on how we raced and be a little bit better to have what it takes to win.”

What are your expectations for Noah’s return to Martinsville this weekend after a top-five finish his first time there in the spring?

“We had a good run last time without a lot of practice, so hopefully Friday we can get our full two hours of practice. I think Noah and I are both on the same page that we’re going for a win this time. I feel like we’ll have a good Switch Tundra, and if he does as good a job as he did last time we were at Martinsville, we’ll make the truck better, make him better and have a shot at the win.”

KBM-025: The No. 18 Switch team will race KBM-025, for Saturday’s Texas Roadhouse 200. Gragson raced this truck at Gateway (ninth) and New Hampshire (pole and finished 15th). In nine starts it has one win at Gateway with Christopher Bell in 2016.

Richmond has two wins at Martinsville as a crew chief in the NCWTS. His first victory came with Dennis Setzer in 2008, followed by a trip to Victory Lane with Kevin Harvick in 2012. He and Gragson finished fourth in the spring event.