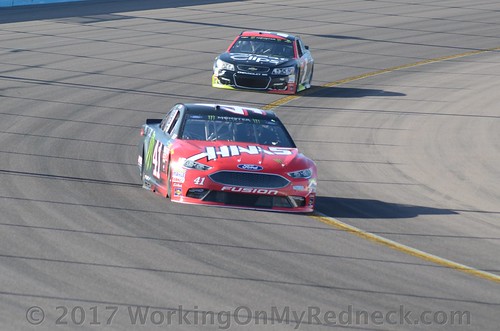 ● On lap 18, Busch made slight contact with the outside wall and had to make an unschedueled pit stop for two tires and fuel. He returned to the race in the 38th position, one lap down.

● Busch pitted under caution on lap 33 for four tires and fuel. The team also made a tire pressure adjustment while he was in 34th place, one lap down.

● On lap 51, Busch was 31st when the caution came out. That gave Busch the “Lucky Dog” to get his lap back. Busch also pitted for four tires, fuel and a tire pressure adjustment.

● On lap 83, Busch pitted for four tires and fuel and a tire pressure adjustment.

● Busch pitted on lap 139 for four tires, fuel and a wedge adjustment.

● On lap 199, Busch pitted for four tires and fuel while in the ninth position.

● The final pit stop for Busch was for four tires and fuel, and the crew got him out in second place.

● Twenty-two of the 40 drivers in the Hollywood Casino 400 finished on the lead lap.

● Busch now has six top-five finishes in 2017 and 131 in his career. It was his third top-five at Kansas Speedway.

● Truex won the Hollywood Casino 400 to score his 14th career Monster Energy NASCAR Cup Series victory, his seventh of the season and his second at Kansas.

● Truex leads the championship standings with 4,069 points and holds a 27-point advantage over his nearest pursuer, Kyle Busch.

“I just feel like I’m on razorblades here. I really wanted that one bad. At the end, I had the sticker tires. As I’m warming them up, they weren’t grabbing in the back. I knew that I wasn’t going to get the jump that I needed. I tried to play middle of the ground. Early in the race with scuffs from qualifying I brushed the fence. Kansas – I don’t know what it is about this place. Kyle (Busch) struggles here, too. I feel like I’m on pins and needles most of the day. (Crew chief Tony) Gibson always throws nice adjustments at it, and the race comes to us, and we’re right there. We had a shot at winning. I just feel like I’m pushing too hard early on. I saw (Jimmie) Johnson spin. We saw the 77 spin. All the drivers asked for less downforce and yet never got the softer tire that we hoped for. But we’re right there. When we get it right, we’re right there. It just feels like I have to overdrive. When you’re overdriving you’re not going to make it work.”

The next event on the Monster Energy NASCAR Cup Series schedule is the First Data 500 on Sunday, Oct. 29 at Martinsville (Va.) Speedway.