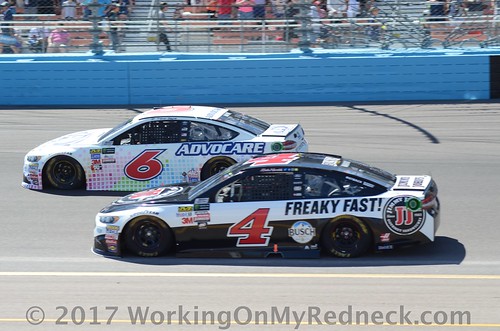 ● The Jimmy John’s Ford Fusion ran in the second position for the majority of Stage 1.

● The No. 4 Ford pitted for four tires, fuel and chassis adjustments during a lap-46 caution to correct tight-handling conditions.

● Harvick restarted from eighth and quickly piloted the “freaky fast” Ford back to second, where he ran for the remainder of the stage.

● The No. 4 team pitted at the end of the stage for four fresh tires, fuel and air pressure and chassis adjustments.

● Harvick continued his run in the second position for the majority of the stage.

● After green-flag pit stops cycled through, Harvick reported a loose wheel, but he continued to run in second place.

● The No. 4 team pitted for four tires and fuel during a lap-156 caution. Harvick restarted the one-lap shootout in the sixth position and powered his way to second place before the conclusion of the stage.

● Harvick led the field for the first 35 laps of the stage.

● On lap 197, a multicar accident brought out red-flag conditions. Harvick opted not to pit and restarted from second.

● The No. 4 Ford’s handling became too tight on lap 209, and Harvick fell back to sixth.

● The team pitted for four tires, fuel and adjustments to run a lap down. After a lap-236 caution, the Jimmy John’s Ford stayed out of the pits to rejoin the lead lap.

● Harvick battled back into the top-10 on the final restart from the 21st position.

● Harvick led three times for 37 laps to bring his laps-led total at Kansas to 596.

● Twenty-two of the 40 drivers in the Hollywood Casino 400 finished on the lead lap.

“As you look at the result of the day, you want to have a chance to win. We had a car capable of winning. Just got stuck in a box, and the box kept on getting smaller and smaller. The caution came out with 47 laps to go, and that put us in a bad spot.”

Playoff Standings (at the conclusion of the Round of 12):