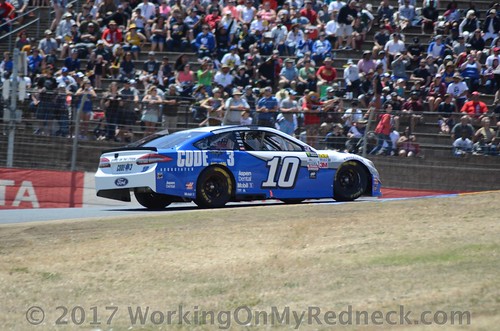 ● The No. 10 Code 3 Associates Ford Fusion team pitted during the competition yellow on lap 30 while running 28th. Crew chief Billy Scott called for four tires and fuel. A slight air pressure change in the right rear was the only adjustment. Patrick reported the car was working better during the next stretch between laps 30 and 46, when the caution waved for the second time. Following another stop on lap 46, Patrick exchanged 25th position with Ricky Stenhouse Jr.

● Patrick was running 25th on lap 125 when green-flag pit stops began. She remained out and made a 58-lap run, climbing as high as third. She pitted on lap 140, and Scott increased air pressure in the right-front tire.

● A late caution in the stage on lap 155 provided a number of teams the chance to pit and altered the No. 10 team’s strategy. Patrick remained out and finished the stage 26th, the first car one lap down.

● Patrick earned a free pass and restarted the race as the final car on the lead lap. She pitted for tires and fuel, and the team made a wedge adjustment to begin the final stage.

● Patrick was running 20th when the No. 10 Code 3 Associates was collected in a multicar accident on lap 198. The team was unable to make repairs, thus ending Patrick’s day at Kansas.

● Patrick earned one point in Sunday’s race at Kansas Speedway, which puts her at 458 total points for the season thus far. She is ranked 28th in the driver point standings.

●  Twenty-two of the 40 drivers in the Hollywood 400 finished on the lead lap.

●  Martin Truex Jr. won the Hollywood Casino 400 to score his 14th career NASCAR Cup Series victory, his series-leading seventh of the season and his second at Kansas. His margin of victory over second-place Kurt Busch was 2.284 seconds.

● Truex leads the championship standings with 4,069 points and holds a 27-point margin over his nearest pursuer, Kyle Busch.

“That is some bad luck. The Code 3 Associates Ford Fusion was just starting to get better, just starting to get hooked up, actually. I felt like I was catching the right lanes and right movements on the track and having good restarts. It would have been nice to finish one off. We haven’t done that in a while. You never know which way (the cars) are going to bounce. It was mayhem. From the cockpit, I was just trying to slow down and miss the 77, but you can’t see every car around you. I want to thank (crew chief) Billy (Scott) and all the guys for their hard work today. The plan was coming together, and unfortunately, we didn’t get to see it through.”

The next event on the Monster Energy NASCAR Cup Series schedule is the First Data 500 on Sunday, Oct. 29 at Martinsville (Va.) Speedway.