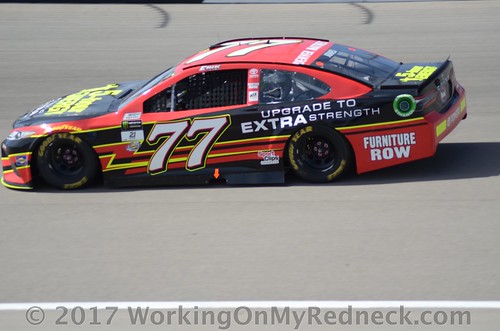 Erik Jones and the No. 77 5-hour ENERGY Extra Strength Toyota were in position late in the Hollywood Casino 400 to put the previous weeks’ bad luck behind them before yet another multicar crash forced an early exit at Kansas Speedway.

The 14-car wreck coming off Turn 2 on Lap 197 of 267 left Jones with a 35th-place finish. Despite the second consecutive DNF (36th at Talladega), Jones remains 19th in the championship point standings, 53 behind Joey Logano in 17th and 48 ahead of Daniel Suarez in 20th.

“I just got loose – I started getting free off of (Turn) two when the 24 (Chase Elliott) starting coming around us and I just lost it,” said Jones. “We had a good run going up there in third place and thought we were going to have a top-five day. Wish we could have ran it out, but it’s just an unfortunate ending. All of us were thinking about Jim Watson and his family and we were hoping to bring home a strong finish for them.”

The No. 77 started the race with a tight handling condition but adjustments called for by crew chief Chris Gayle and determined driving by Jones resulted in a 10th-place finish in the first 80-lap stage. Jones dropped as low as 17th in the second stage but rebounded to finish sixth in Stage 2.

Solid work in the final 107-lap stage allowed Jones to move into the top five early on and up to third for a restart on Lap 193. Close pack racing immediately after the green flag waved caused the turbulent air that created the loose handling on the No. 77 that then caused the multicar crash on Lap 198. Despite the hard hits and getting partially airborne, Jones was uninjured in the incident. The car, however, was too damaged to continue.

“I made the same mistakes here in the spring and this place has just been tough on me,” said Jones. “Fortunately we had a fast 5-hour ENERGY Camry and it was up front, we had worked our way back up to that point after having mishaps at the start of the day. Nonetheless, not the ending that we wanted, but hopefully we can come back a little stronger for Martinsville.”

There were 10 cautions for 49 laps, one red flag for 10 minutes and 14 lead changes among seven drivers.

The next race on the 2017 NASCAR Cup Series schedule is Oct. 29 at Martinsville (Va.) Speedway.