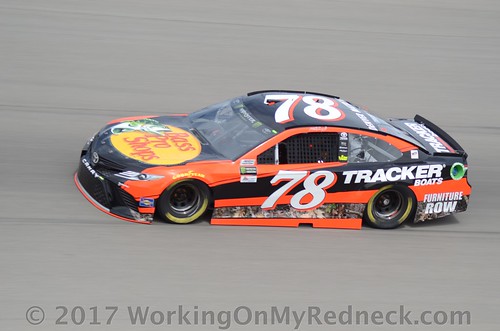 You can’t blame Martin Truex Jr. for looking ahead.

The Monster Energy NASCAR Cup Series leader didn’t need to win the pole position at Kansas Speedway, having already qualified for the Playoff’s Round of 8 with a victory two weeks ago at Charlotte.

But by posting the fastest lap in Friday’s knockout qualifying session at the 1.5-mile track, Truex got a leg up on a trip to the Championship 4 race at Homestead-Miami Speedway, because the time trials at Kansas came with a significant bonus—first choice of pit stalls for the Oct. 29 Round of 8 opener at Martinsville Speedway.

But Truex had to push his car to the limit in the final round to earn his third Coors Light Pole Award of the season, his second at Kansas and the 15th of his career.

“I was shaking a little—I’m not going to lie,” Truex said. “My heart was beating. It gets the adrenaline going so high to put down a lap like that, to go the fastest you’ve gone all day in that final round.

“We put it all together. We got the balance better, and I stepped up and put it on the line out there, and it stuck. The commitment level was high, and the car handled it well. That’s always a good combination.”

Ryan Blaney qualified third, Matt Kenseth fourth and Denny Hamlin fifth, as Playoff drivers garnered the top five spots on the grid. Daniel Suarez was sixth, followed by Erik Jones and Kyle Busch, as Toyota drivers claimed six of the top eight starting positions, the only exceptions being the Fords of Harvick and Blaney.

Because qualifying at Martinsville is on the same day as the race, pit selection at the .526-mile short track was tied to qualifying at Kansas, where the No. 1 pit stall gives a driver unfettered egress from pit road.

“It was definitely on our minds,” said Truex, who has won a series-best six races in a dream season for the No. 78 Furniture Row Racing team. “We talked about it. It was like ‘It’d be pretty nice to go to Martinsville and have the No. 1 pit stall.’

“It was definitely on our minds, but I don’t know if it really played into how we got the job done or not. But it was definitely good timing, more than anything, because that’s going to be huge for us going into the Round of 8 next week.”

Harvick, the 2014 series champion described his qualifying session as “three sketchy laps,” but feels he has a competitive car for the race that will trim the Playoff field from 12 drivers to eight.

“I think we have a car that can be capable of staying up there and hopefully having a chance to win the race at the end,” Harvick said. “It’s a good start to the weekend. That’s half the battle when you’re trying to collect stage points in the first stage and get pit stall selection and try and gain all the advantages that you can on Friday.

“That’s something that our team did a good job at this year. I feel like our cars are a lot faster from the beginning of the year on the mile-and-a-half race tracks, and we’re on the game. It’s been a fun few weeks.”

Seven-time champion Jimmie Johnson, who currently leads Kyle Busch by seven points for the final spot in the Round of 8, and will start 13th after missing the final round by .020 seconds. Playoff driver Jamie McMurray qualified ninth in the fastest Chevrolet.

Playoff drivers Kyle Larson and Chase Elliott will start 14th and 15th, respectively. Ricky Stenhouse Jr., the only Playoff driver who failed to make the second round, will take the green flag from 25th.