Make no mistake about it, partial schedule or not, Codie Rohrbaugh and his Grant County Mulch Racing (GCM) team have made the best of their appearances in the ARCA Racing Series presented by Menards in 2017.

Set for his eighth ARCA start of the season in Friday night’s Kansas ARCA 150, Rohrbaugh and his family-owned team are determined to end the year on a high note with their second top-10 finish in his second appearance in the land of Oz.

“I can’t believe it’s the end of the year,” said Rohrbaugh. “It seems like this year went incredibly fast but we’ve made a ton of gains from when we took the green flag this season and hope to make some more when the checkered flag fallson Friday night.”

With a career-best eighth place finish earned in June at Michigan International Speedway, the Petersburg, West Virginia native says his team has had the speed and car capable of earning better finishes, but when it boils down to lady luck, it hasn’t been on their side.

“We’ve had some bad luck at Chicago and Kansas, but I’m hoping we can right the ship and return to Kansas with some speed and shake the monkey off our back and give us some momentum to get ready for 2018.”

Rohrbaugh says he likes the fast 1.5-mile track of Kansas Speedway and despite having a fast No. 7 Grant County Mulch Chevrolet in the 2016 ARCA finale, an electrical issue 35 laps into the race left the former CARS Tour competitor with a 32nd place finish.

This weekend, anything less than a top-10 performance would be just as disappointing.

“We’re taking the car we had at Chicagoland and Kentucky,” offered Rohrbaugh. “We got collected in a late race situation at Kentucky and banged up the car, but my guys have done a great job putting her back together for Kansas.

“I feel like with the speed we had last year, that setup will be a good place for us to start. The biggest challenge for our team will be keeping up with the handling throughout the day from practice to qualifying and then the race.

“We need to be able to roll our car through the corners and carry the speed on the exit of the turns to get that momentum for the frontstretch and backstretch. We’ll have an opportunity to tweak on it once the race starts, but we need to be in the ballpark.

“We’ll hope for the best and just be grateful we’re at the track!”

Entering Kansas, the 23-year-old has competed in seven races this season, qualifying inside the top-10 five times, including a career-best fourth at Pocono (Pa.) Raceway in July. The Petersburg, W.V. native averages a 14.9 finish, which includes six top-16 finishes in the last seven races.

In nine career ARCA starts, he has a best finish of eighth at Michigan International Speedway (June 2017) after starting a career-best eighth at the same 2.0-mile speedway.

Marketing partnership opportunities are available for the No. 7 Grant County Mulch Chevrolet for the 2018 ARCA Racing Series and NASCAR Camping World Truck Series seasons and beyond. Interested inquiries are encouraged to contact kyle@gcmulch.com.

The Kansas ARCA 150 (100 laps / 150 miles) is the 20th of 20 races on the 2017 ARCA Racing Series presented by Menards schedule. Practice begins Fri., Oct. 20 with a two-hour practice session planned from 9:30 a.m. – 11:30 a.m. General Tire pole qualifying is set for later in the day at2:30 p.m. The race is set to take the green flag later shortly after 7:30 p.m. The event will be broadcasted live on FOX Sports 2 (FS2), whileARCARacing.com will stream live timing and scoring throughout the week’s activities. All times are local (CT). 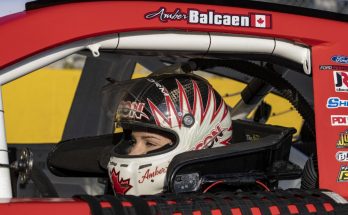