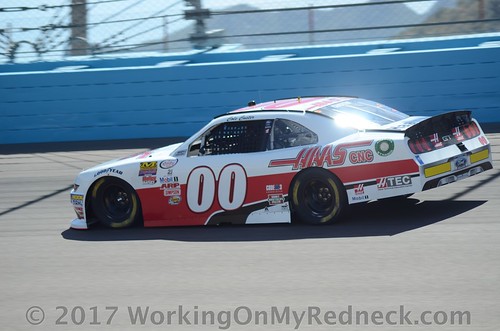 ● Piloted his Haas Automation Ford Mustang into the top-10 by lap 20.

● Noted a tight-handling condition, but managed to make a pass and gain one more position before the conclusion of the stage.

● Custer pitted for four tires, fuel and chassis adjustments at the end of the stage.

● Custer continued to fight a tight-handling condition at the beginning of the stage.

● Ran as high as seventh during Stage 2 until his car’s balance shifted to being loose.

● At the conclusion of the stage, pitted for four fresh tires, fuel and chassis adjustments.

● After a caution on lap 141, Custer pitted for four tires, fuel and adjustments. He restarted in the 11th position.

● Custer drove to eighth place before a final caution on lap 160, where he pitted for four more tires and fuel to restart back in 11th position.

● With 40 laps to go, Custer powered his way through the field to finish just outside of the top-five.

● Custer was the highest finishing rookie in the Drive for the Cure 300. It was his eighth rookie of the race award this season.

● Custer has earned the most points at 1.5-mile tracks among XFINITY Series drivers this season.

● Custer’s sixth-place finish was his fourth-consecutive top-10 this season.

● Due to inclement weather, qualifying for the Drive for the Cure 300 was canceled. The field was set by owner points.

● This was the final race in the first round of the playoffs. Custer advanced to the second round and is seeded fifth.

● There were eight caution periods for 43 laps in the Drive for the Cure 300.

● Alex Bowman won the Drive for the Cure 300 to score his first career XFINITY Series victory. His margin of victory over second-place Sam Hornish Jr. was 1.390 seconds.

“It was a really good night for us. We got our car better. We didn’t have the track position that we wanted, so I think we were more of a third- or fourth-place car, but our Haas Automation Mustang was really solid tonight. I was happy with the improvements we made through the weekend, so I’m looking forward to the next round. It’s going to be a dogfight, that’s for sure. Everybody in this next round has a lot of speed. I think if we can win a race it’s going to be huge. It will be tough, but we just have to really be on our game and fire on all cylinders.”

Failed to advance to the Round of 8