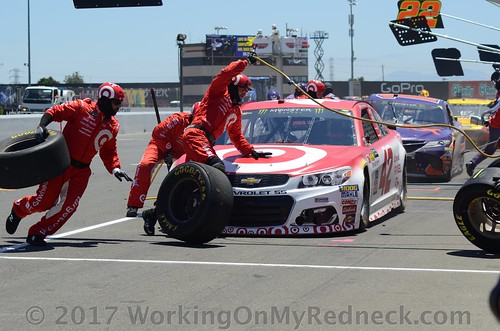 Kyle Larson scored a top-10 in Sunday’s Bank of America 500 at Charlotte Motor Speedway, but the driver of the No. 42 Chip Ganassi Racing Chevrolet left the first race in the Round of 12 of the Monster Energy NASCAR Cup Series Playoff knowing he should have done better with one of the fastest cars on the track.

Larson ran in the top five early on but missed his pit stall on the first pass down pit road, requiring a return trip and a resulting loss of track position. He recovered and climbed back toward the front.

Larson subsequently led Laps 268 through 279, but he lost 10 spots on pit road when his rear tire carrier tripped over the hose to an air gun during a stop under caution on Lap 327, and the tire changer had difficulty removing the lugs from the left rear.

A pair of less-than-stellar restarts late in the race—not to mention contact from Kurt Busch’s spinning car on Lap 335—relegated Larson to a 10th-place result that could and should have been better.

“I felt like I had a car to win,” Larson said. “I made a mistake on pit road early. We rebounded from that. And then we had a costly mistake late and somewhat rebounded; but then those last two restarts didn’t go my way…

“Disappointing, but we fought hard.”