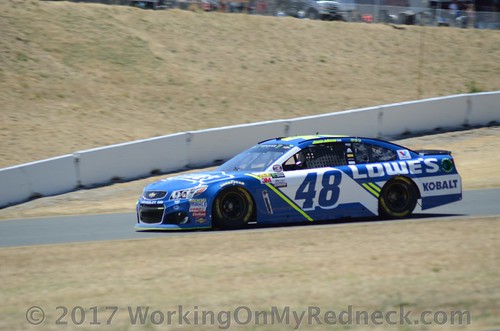 After running seventh in Sunday’s Bank of America 500 at Charlotte Motor Speedway, seven-time Monster Energy NSCAR Cup Series champion Jimmie Johnson is in a precarious position heading to the second race in the Round of 12 at Talladega Superspeedway, a track he doesn’t relish.

Johnson had worked his way into the top five before a snafu on pit road dropped him to 16th for a restart on Lap 284 of 337. The driver of the No. 48 Chevrolet had to wait several extra seconds while the lug nuts on the left front tire were tightened after the car had started to leave the pit box.

“We worked our way up to fourth and then had a little miscue on pit road and restarted 16th or something and got back up to seventh,” Johnson said. “Decent progress. The car was not easy to drive and not fun to drive, but my conditions were a lot better than the other guys, and I could work my way back up through there.”

Nevertheless, Johnson is seventh in the series standings and a mere eight points ahead of ninth-place Matt Kenseth facing the uncertainty and potential peril of a restrictor-plate race.