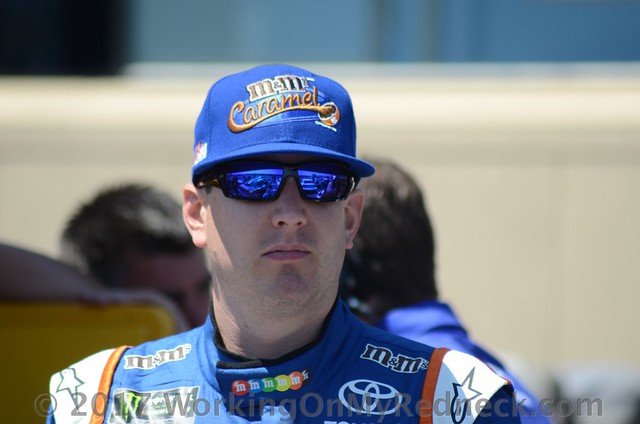 Kyle Busch didn’t stagger, nor did he stumble as he emerged from the Charlotte Motor Speedway Infield Care Center on Sunday. Still he gingerly made his way toward a golf cart while he delicately slipped a pair of dark sunglasses across an ashen face.

Busch spent nearly an hour in the clinic following the Bank of America 500, receiving fluids and other treatment for the effects of a muggy day that was masked by overcast skies. Medical personnel attended to him shortly after he exited his Joe Gibbs Racing Toyota Camry following a 29th-place finish.

But bigger than that 29th-place finish is the 0-for-28 collar he’ll now wear at least until next May, that being his record in official races at Charlotte. And in the short term an even more significant total is 12, as in the dozen points that separate him from the cutline that will slice four drivers from the playoff field to eight in two weeks after the series races at Kansas.

More fun with numbers: His sticky day at Charlotte started with him second in points –– it ended with him sixth.

“It stinks to give up points,” Busch said. “We came in here thinking we had a shot to run in the top 10 and we did. We just threw that … I threw it away. So we’re still above the cutline, but we don’t have that cushion that we’d like to have. You can go into Talladega (next week), crash out early and be in the back of the pack and not finish well and be coming from behind in Kansas.”

The idea of having to press over the next two weeks didn’t seem necessary when things began on Sunday.

Busch was in second place when he hit the Turn 3 wall on Lap 136, suffering damage to his right rear quarterpanel. His team had the car back out before the five-minute clock expired, yet the lost time was too much to overcome. Indeed his car was never competitive after that, with his No. 18 Toyota falling behind by six laps while battling random slips into the wall.

To compound matters, the effects of a humid day began to take their toll on the 2015 Monster Energy NASCAR Cup Series champion. And a suffocating environment was exacerbated by crushed panels on his car that permitted noxious fumes into the cockpit.

Busch sprawled on the infield grass for several minutes after the race before he slowly stood, shed his firesuit and boarded an ambulance that carried him to the medical center.

“They said my CO was in the double digits, so obviously fighting some of that, too,” Busch said. “But, overall, it was just the hottest I’ve been in the car. I didn’t feel sick from the CO or anything like that. I just felt heat stroke and I’ve had that before. Living out in Vegas, you have that a few times when you’re playing outside in the summer as a kid. I knew what it was, I knew what it felt like, but the only way to do it was to get out and cool down.”

Sunday was the 11th time that Busch, who started fourth, finished 20th or worse at Charlotte. Three times he’s been a runner-up, including the Coca-Cola 600 in May. He has 16 top-10 showings and has finished in the top-five 11 times.

Yet, again, he remains winless.

“So far he hasn’t (had good luck at Charlotte),” Gibbs told reporters along pit road. “We hope to climb out that hole someday.”

Talladega looms out of the front windsheld!