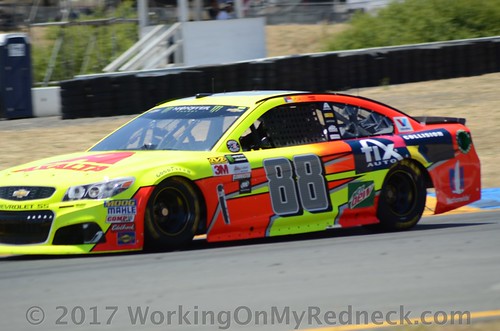 Make no mistake, Dale Earnhardt Jr. took issue with the suggestion that missing the Monster Energy NASCAR Cup Series Playoff this year has allowed the driver of the No. 88 Hendrick Motorsports Chevrolet to compete under less pressure and have more fun in his final races as full-time driver.

“I think that the fans would be having more fun if we were racing for the championship and then I would be having more fun interacting with them in that manner and their excitement of it,” Earnhardt said on Friday after opening practice at Charlotte Motor Speedway. “So I think it’s a little bittersweet for me and the fans and our supporters with the situation we’re in. I only really have fun when we run well.

“It’s been a difficult year from a fun meter standpoint. We haven’t really moved the needle too much this year. This past couple of weekends, especially at Dover and Richmond, we’ve seen some improvements and had fun driving the car and been quick. And I think we were good off the truck today. I thought we had something to build on.”

Earnhardt’s optimism quickly dissipated when he hit the Turn 4 wall in the first five minutes of practice. The No. 88 team rolled out a backup car, and Earnhardt ran two laps in that Chevy before the end of the 85-minute session.

“I don’t really know how to compare the backup car to the primary,” Earnhardt said after the abbreviated run. “And it doesn’t have all the bells and whistles, so it might not be quite as good as I was hoping, I guess, initially when we rolled it off the truck today.

“But, that’s it. I enjoy running well. When I don’t run well, I don’t know that anybody enjoys that. And it’s hard to make light of it or to smile through it. And I think the fans would have more fun, and in turn, me having more fun if we were in the thick of the championship battle.”

The needle on the fun meter didn’t move.