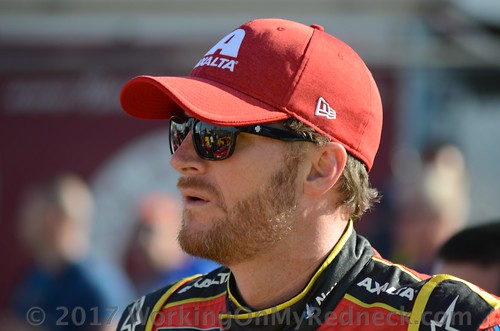 As he moves through his final season of Monster Energy NASCAR Cup Series racing, Dale Earnhardt Jr. has had one consistent request—that gifts and recognition in his honor have a broader societal impact. Moments after posting the third-fastest speed in the opening minutes of Monster Energy NASCAR Cup Series practice, Dale Earnhardt Jr. crashed Friday at Charlotte Motor Speedway.

Earnhardt got loose entering Turn 4 and slid up the track where he struck the outside wall preparing for the Monster Energy NASCAR Cup Series Bank of America 500.

During two separate seasons, Earnhardt missed races because of concussion symptoms. In 2012 he was sidelined for two events, and last year he sat out the final 18 races after his symptoms from a wreck at Michigan worsened drastically in subsequent weeks.

During Friday’s presentation, the football team from Mooresville High School, Earnhardt’s alma mater, was ushered into the media center as part of the surprise.

“We have a lot of history with concussions and awareness and rehab and all that good stuff, so this is something that is actually very close to my heart,” Earnhardt said. “I hope to be able to continue to help others going forward. This is a great way to do that, so thanks again.”

“I was four 4-feet-10-inches tall at the time,” Earnhardt said of the year he entered high school. “I think I was 5-foot-3 when I got my driver’s license. So I was real short, and we were driving by the football field—well, the practice field—and they were out there practicing, and I said, ‘I want to play football.’ And the guy said, I’m going to take you down and introduce you to the soccer coach, because I don’t think you need to be playing football.

“So I played soccer anyways. I got me a letter jacket and all that. We went to State and lost, but it was a lot of fun. I played one year, and I was the back-up, so I sat on the bench all year and I got to play a couple of games. We were a pretty good team, so we would get a big lead, I would get in a couple of games.”