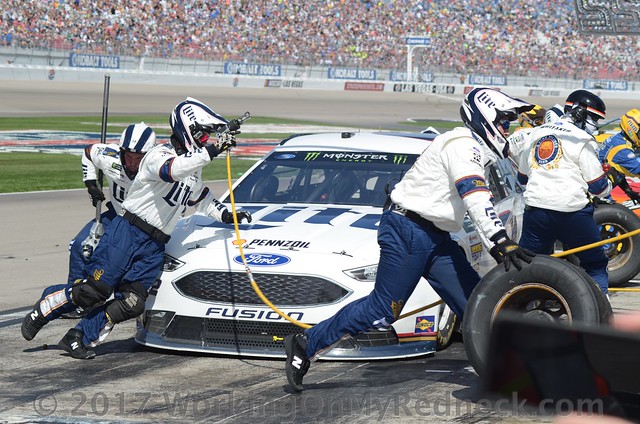 Recap: After securing a spot in the Round of 12 for the Monster Energy NASCAR Cup Series Playoffs one week ago at New Hampshire, Brad Keselowski and the No. 2 Miller Lite Ford Fusion team recorded a solid 10th-place finish in the Apache Warrior 400 at Dover International Raceway on Sunday afternoon. Keselowski began the race from the 16th position and after fighting a handling condition that was loose in and tight in the center, he and the team caught a great break when the first caution of the day was displayed at lap 87. Crew chief Paul Wolfe had kept his driver on track longer than most of the other competitors, most of whom were a lap down to the leaders. Keselowski was running in the second position when the caution came out and he was able to pit under the yellow flag. A great pit stop by the Miller Lite crew got Keselowski out in the lead for the restart at lap 92 and he was able to win the first, 120-lap stage to gain 10 bonus points and one playoff point. The second, 120-lap stage began with Keselowski in the third position. Again, he had to deal with a handling condition that was similar to the first run of the day. After dropping back as far as the 10th position, Keselowski rallied to finish the second stage in the eighth position.  Keselowski restarted the Miller Lite Ford from the eighth position for the final, 160-lap stage and he showed good speed throughout the stage. Wolfe again tried to catch a timely caution flag by leaving Keselowski out for a long run prior to their final pit stop of the day. That caution never materialized and after Keselowski made his green-flag pit stop at lap 340 he cycled back to the 15th position. He was able to make a strong charge over the final 60 laps to secure a 10th-place finish.

Quote: “Qualified 16th with the Miller Lite Ford. Had some pretty good strategy running long and caught the yellow cycle. Had a good pit stop that put us in position to win the first stage which was good. Then we cycled back to sixth the next two rounds and fought really hard from there to just keep track position. We were holding on to sixth or seventh most of the race and at the end we tried to a little bit of strategy and it just didn’t quite work out.”

Recap:  Joey Logano started 18th and finished 15th in the No. 22 Shell-Pennzoil Ford Fusion in Sunday afternoon’s Apache Warrior 400 at Dover International Speedway. Logano started the race and ran just inside the top-20 during the opening stage, primarily battling dirty air from starting mid-pack. On the first pit stop of the race, crew chief Todd Gordon called for wedge and air pressure adjustments to combat the loose in and tight center condition in the No. 22 Ford Fusion. Logano and company found themselves a lap down to the leaders at the conclusion of the first stage where they were in 20th position. Fortunately, a quick caution at lap 135 would cycle the team forward as Logano was the beneficiary of the free pass. Throughout the second stage, Logano reported the handling of the No. 22 Shell-Pennzoil Ford to be free on corner entry and exit, despite moving forward into the top-15. Gordon again elected to adjust with air pressure, also telling Logano that his wheel temperatures were good, allowing him to use more front brake in the next run. Late in the second stage Logano reported his car was as good as it had been all race and felt like he was better than most the competitors in front of him. The team would continue to cycle forward, running long on the fourth run of the afternoon and moving as high as second before pitting. The gamble of running long cycled the team back to the 15th position as the race ran green to the conclusion.

Quote:  “We made good adjustments all day on our Shell-Pennzoil Ford. I felt like in the middle of the race I was as good as most of the cars in front of us, but were just kind of stuck with the track position. Our car wasn’t quite as good in dirty air, but the team did a great job of executing all day we were in a position to gamble and run long at the end.”