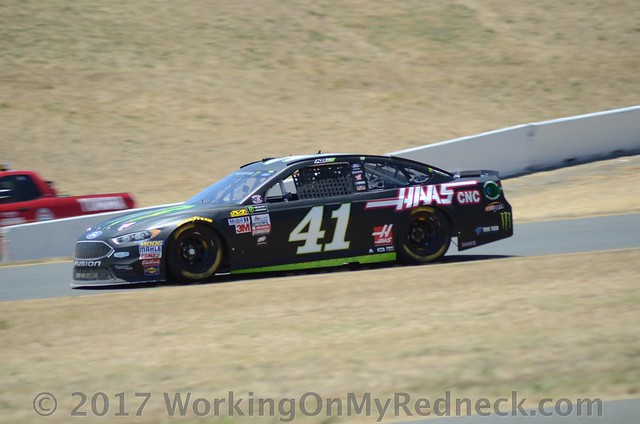 ● Kurt Busch started 13th and finished 22nd, one lap down.

● On lap 18, while in ninth, Busch told the crew that his No. 41 Monster Energy/Haas Automation Ford Fusion was loose on entry and tight on exit.

● Busch had fallen to 15th by lap 60 as the car was still battling the condition of being loose in and tight off.

● The caution came out on lap 87 with Busch two laps down. He stayed out while the leaders pitted, took the wave-around and restarted 25th, one lap down.

● Busch started 21st and finished 17th. He got his lap back by taking the wave-around after the first stage.

● On lap 168, Busch was 20th and on the lead lap. The car was still loose in and tight off but getting better.

● Pitted on lap 169 for four tires, fuel and wedge and tire pressureadjustments.

● On lap 242, Busch said the car was still loose and tight off. The crew made another wedge adjustment and dropped the tire pressure in all four tires.

● On lap 332 while in 12th Busch pitted for four tires and fuel. Unfortunately, he had a commitment-line violation and had to serve a passthrough penalty.

● There were four caution periods for a total of 24 laps.

● Kyle Busch won the Apache Warrior 400 to score his 42nd career NASCAR Cup Series victory, his fourth of the season, second in a row and third at Dover. His margin of victory over second-place Chase Elliott was .357 of a second.

“Yeah, disappointed in the way that I drove all through these playoff runs. I was driving at 101 percent trying to get every ounce of speed out of it. It just never had a flow for three races. We might have finished 10th here today. The wreck last week really put us in a hole. We needed a perfect day today and playoff stage points. We just really never did well in Stage 1, and I thought that it might be our Achilles heel. If we add up the numbers (that’s) probably where it was. I can’t fault anybody. We ran hard. We gave it everything we had.”

Playoff Standings (at the conclusion of the Round of 16):

Failed to Advance to Round of 12: