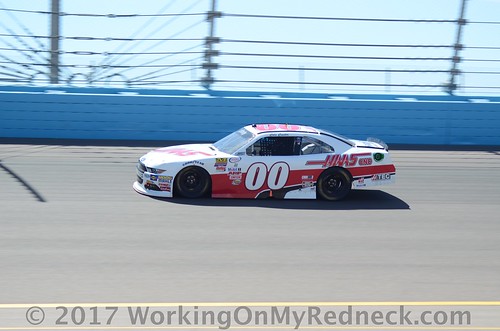 ● In the opening laps of the stage, Custer piloted his Haas Automation Mustang in and around the top-five, but noted loose-handling conditions.

● Custer ran as high as fourth place in the second stage.

● Throughout the stage, the balance of Custer’s Haas Automation Mustang shifted to the tight side as the stage wore on.

● Custer pitted for four more tires, fuel and adjustments at the conclusion of Stage 2.

● On the initial restart of the final stage, Custer was caught in traffic and fell to the 12th position.

● He continued to note tight-handling conditions, but re-entered the top-10 halfway through the stage.

● Custer continued to move his Haas Automation Mustang up through the field, gaining a few more spots by the time the checkered flag waved in order to earn his 15th top-10 of the season.

● The Use Your Melon. Drive Sober 200 was Custer’s 33rd NASCAR XFINITY Series start and his seventh at Dover (Del.) International Speedway.

● Ryan Blaney won the Use Your Melon. Drive Sober 200 to score his sixth career XFINITY Series victory, second of the season and first at Dover. His margin of victory over second-place Justin Allgaier was 4.852 seconds.

“We had a solid Haas Automation Mustang. We definitely didn’t have the best car but we made it better all day. The last restart didn’t play out for us; it was tough to pass. We got held up in the wrong lane there. We didn’t make any mistakes and got the points that we needed. It was a good day and we’ll head to Charlotte with confidence.”