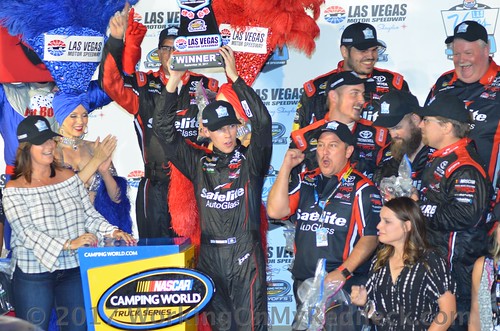 Rhodes, who earlier in the season lost what appeared to be a sure victory at Kansas Speedway when a piece of debris punctured his Toyota’s radiator, blocked Bell’s last-gasp effort by going all the way to the track’s apron to take the checkered flag.

Rhodes, who drives for ThorSport Racing, started sixth in the 28-truck field to become the 1.5-mile speedway’s 10th consecutive different winner. He joins Bell to advance to the Round of 6 in the NASCAR Camping World Truck Series Playoffs.

“I used every play in my playbook,” said Rhodes of the final laps battle. “I knew if I could keep him close to me, he couldn’t break the (air) bubble.  This is the biggest high of my life.

“So many things have gone wrong and now here I am in Victory Lane.”

Rhodes’ victory came in his 45th series start. His official victory margin over Bell was 0.066 seconds.

Bell, who led three times for 64 laps and dominated much of the 146-lap race in his Kyle Busch Motorsports Toyota, blamed himself for coming up short in his quest for a sixth season victory.

“I just didn’t get it done there on the last restart (at Lap 140),” he said. “He’s (Rhodes) been long overdue for that win and he earned it tonight.”

Chase Briscoe finished third in his Brad Keselowski Racing Ford, followed by BKR teammate Austin Cindric, who overcame an early-race accident. Kaz Grala, who started 14th, also battled back from an early incident, was the top-finishing Chevrolet in fifth.

Pole sitter Ryan Truex was unable to lead the opening lap but had put his Toyota in position for a solid top-10 finish. A brush with the wall in the closing laps while battling Briscoe and Grant Enfinger for third sent his Toyota to pit road, where he lost two laps and finished 12th.

Briscoe won the race’s first stage by 1.25 seconds over Johnny Sauter. Sauter clawed his way back to 10th-place finish, a lap behind, after cutting a tire and twice speeding on pit road.

Rhodes claimed Stage 2 by 0.419 seconds over Bell in a preview of the final stage finish.

While both Rhodes and Bell are guaranteed to move into the Round of 6 in the NASCAR Camping World Truck Series Playoffs, the final four spots remain up for grabs at Talladega Superspeedway on Oct. 14. Crafton is best placed, followed by Sauter and Briscoe while Grala and John H. Nemechek are currently below the cutoff point.